Ms Dynamite is excited. She’s just finished the DJmag cover shoot and is about to film the video for her brand new single ‘Wot U Talking About’, the dubstep party tune with a “banging beat” and heavy d&b bassline produced by Redlight and due out next week on her own Pepperpot Records.

“I’m like a little kid again,” says the 29-year-old rapper, giggling as if to prove the point. “I feel like I did when I first started out 10 years ago.”

Anyone who doesn’t remember Dynamite’s first explosive assault on UK urban dance music over a decade ago might be wondering where exactly this vocal chameleon who’s contributed guest vocals on tracks such as Zinc’s 2009-released ‘Wile Out’ and Nextmen & Andy Cato’s ‘Lions Den’ has sprung from. After a hugely successful career that started when Dynamite was just 17-years-old and quickly went on to include a smattering of chart hits, a lucrative record deal with Polydor, two critically-acclaimed albums and a string of awards including three MOBOs, two BRITs and the 2002 Mercury Prize for her ‘A Little Deeper’ album, she disappeared from music and the public eye in late 2006.

“It definitely feels good to be back,” says Dynamite, known to her mum as Naomi Daley. “I’m just having fun, working with producers I respect and performing live in clubs. In the past 18 months I’ve worked with Zinc, Magnetic Man, Redlight, Gavin Koolman, Riva Starr, Major Lazer, Shy FX and Labrinth. Most of the stuff I’ve done is actually tracks I'm featuring on, which I'm really flattered about because all the producers I’ve worked with are hot in their own fields.”

Unlike the quirky, jokey lyrics she spits on ‘Wot U Talking About’ and her combo of sweet singing and ragga-style rapping on ‘Lions Den’, Dynamite’s vocal on Zinc’s ‘Wile Out’ is pure velvety bliss. The track itself epitomizes the so-called ubiquitous “crack house” sound, seguing elements of bashment, house and electro into a sure-fire party tune. Taken from the 2009-released, 10-track Zinc EP that unveiled his lethal new production style combining of brutal basslines and hard-hitting 4/4 rhythms, ‘crack house’ is just one of the sounds that Dynamite’s been getting hot under the collar about in recent months.

“I love producers such as Fake Blood and Boy 8-Bit and they make that sound too,” she says. “It’s just good house music that focuses on the fun things in life.”

Pogoing Frenzy
Dynamite’s just done a new track with Zinc, the urban dance hit-in-the-making ‘Luv Dat’ the 2010 update to ‘Wile Out’, already causing ructions in clubs up and down the UK, and she recently guested on a track called ‘Fire’ by Magnetic Man, the incendiary triumvirate of Benga, Skream and Artwork. They played the track when they headlined the dance stage at Glastonbury back in June, propelling the crowd into a pogoing frenzy.

And as you read this, Dynamite is putting the finishing touches to a track called ‘Neva Soft’ that she’s been working on with Labrinth, the producer behind Tinie Tempah, known for adding a Timbaland-esque pop slant to urban-sounding beats.

“The track is still urban dance music, but it sits at the poppier end,” she says.

“’Neva Soft’ itself is reminiscent of lovers rock, one of my favourite genres of music. With that track, I wanted to bring some elements of my musical loves into the vibe and beat as well as the lyrics, and Labrinth couldn't have done a better job if he tried.”

Dynamite says her childhood was “ fairly average” but, minutes later, says that growing up in Archway, London, as the oldest of eleven siblings was “tough at times”. Her parents — a Scottish mother and Jamaican father — split when she was two-years-old. She still lives in London, now with her six-year-old son. Like most of her peers at Acland Burghley School in Tufnell Park, Dynamite started getting into hip-hop and UK garage as a teenager. But, she says, her musical tastes were informed early on by reggae artists such as Capleton, Dennis Brown, Gregory Issacs and Bunny Wailer, musicians she says she still listens to now. 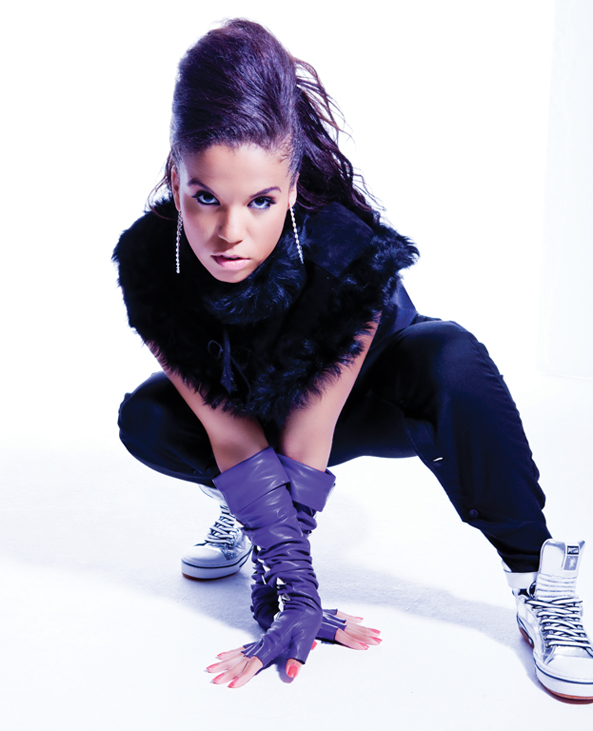 Inspiration
By the time she turned 16, Dynamite had already started MCing.
“I just found what was going on in the clubs so inspiring and I felt I had something to say,” she remembers. “So I picked up a mic and starting rapping.”

Calling herself Lady Dynamite, she took to the clubs, creating a stir because her lyrics were direct, clever and delivered with a sassy rhythm and explosive force that belied her 5ft6 stature. Her added signature was that her image was based solely on her talent and her feisty on-stage persona, rather than her sexuality. Not much has changed on that front. Since Dynamite ended her music-making hiatus in 2009 her plan has been to “have no definite plan”; but those components that first made her name remain intact. Added to that original potent recipe are extra doses of confidence, skill and finesse. She might be the UK’s most successful female rapper but there’s no diva attitude that comes with it. Maybe that’s because Dynamite still makes a point of avoiding ‘yes men’. Back then and now she’s refused to be a puppet; ensuring the decisions she makes about her music and her career are her own.

“If the beats are good and the basslines are hot then I’m getting involved,” grins Dynamite. “I’m just enjoying being in the clubs again and the great thing is that I can work with pretty much who I want. I feel very privileged to be able to do that.”

So what does she think has changed about the UK dance music scene since she first started out over 10 years ago?

“To get a tune like ‘Booo!’ played on a mainstream Radio station such as Radio 1 back then you had to do a 4/4 dance remix,” says Dynamite.

“I think that’s the biggest thing that’s changed about UK music since then. Now you get underground urban music played fresh on Radio 1. Also there’s more ways to access new music via the internet. It’s a lot more democratic now. The good stuff gets out there to the masses quicker. It’s exciting times.”

Redlight and Dynamite’s ‘Wot U Talking About’ was fresh from the studio when it got played by Annie Mac on the Radio 1 stage at Glastonbury back in June. Around that same time, Zane Lowe made it his ‘Hottest Record In The World’ on his Radio 1 show.

Dynamite currently performs live with fellow Londoner, DJ 3. Since she started doing live shows again she’s been playing in UK clubs from North London to Newcastle, as well as regular slots abroad, and is shortly to perform one of her most high profile new gigs yet at London’s SW4 Festival on 29th August, at Clapham Common. These days, she has a huge repertoire to choose from when it comes to deciding which tracks to perform live.

“I always do ‘Booo!’,” she says. “Most people expect to hear that. But then they also want the new stuff. That seems to be going down really well, too.”

Dynamite’s ability to switch from MC to r&b style vocals then ragga-ranting is probably one of the main reasons why she’s been able to find success again so quickly after taking a career break. In a musical climate when reputation isn’t enough to hang a career on, Dynamite has come back armed with the raw, undiluted talent that got her noticed in the first place.

Lost and Found
When Speech Debelle won the Mercury prize in 2009 (the first woman to scoop it after Dynamite bagged the award in 2002) Dynamite broke her silence about her reasons for quitting music and was infamously quoted in The Independent as saying “You can lose your way after winning the Mercury”.

“To be totally honest, I definitely lost my way,” she confesses. “I really just wanted to be at home with my son and I shouldn’t have tried to come back so quickly with the second album. The way I feel about music is that I want to always be able to give it 100% and because I’d just become a mother and my focus was on that I couldn’t give as much attention to the music. I wasn’t ready to come back.”

“I had success at such an early age and that did put me apart from my peers a bit,” she admits. “After ‘A Little Deeper’ was released, I definitely started work on the second album too soon. I suppose what I needed to do was some real living; to give myself a chance to get used to how my life had changed. Instead I did ‘Judgement Days’ and then straight after that had to go through the whole process of promoting it, traveling and all that. All this after I’d just had my son.”

Eventually the stress got to her and, in 2006, Dynamite appeared in court charged with slapping a police officer. She avoided a jail sentence and was ordered to carry out 60 hours of community work. When DJmag asks her about this incident Dynamite clams up. It’s a part of her past that pre-empted her disappearance from the music scene and, she says, she’d rather not talk about it.

“I wasn’t happy [at that time] and that’s when I realised that actually music wasn’t what I wanted to do any more,” she reasons. “That’s why I just cut off from music and I thought, until I feel like I’m totally ready to go back and do that again, then I’m not going to.”

Now, says Dynamite, her enthusiasm for music is hitting the 100% mark again. And featuring on a string of chilli-hot urban dance tracks and performing in clubs is just the beginning. Dynamite already has 20 tracks ready for her new album that, she says, will be focused around the soul, funk and “earthy flavours” that she loves.

“Saying that I’m not sure what is going to be on the album yet,” she says.

“I write my songs in all sorts of places. I even went to Ibiza for a month earlier this year to do some writing.”

For this new album, due next year, Dynamite is taking control as executive producer; combining everything she’s learned in her long and varied career and distilling it into one diamond-cast package.

In the meantime, she’s focusing on performing live and when she talks about her forthcoming show at SW4, she giggles again, like the young Lady Dynamite that DJmag first interviewed back in 1999, just weeks before the release of ‘Booo!’ — and it’s not just her live set she’s excited about.

“I can’t wait to see Salt N Pepa, and Erick Morillo too,” she says. “That’s the best thing about being back — being able to perform, but also vibe off the other performers too. That’s what music is about for me.”