HOUSEKEEPING are a four-man DJ collective on a mission to make dance music fun again. If their recent exploits across the American and European continents are any indication, they’re succeeding...

On a hot, humid August night, DJ Mag finds HOUSEKEEPING rattling the ancient walls of a small underground cave tucked inside a tree-lined hill in the middle of Ibiza. Bongos, shakers and chirps abound in the London-based quartet’s DJ sets, and in the productions each of its members release. Hands flailing and hips shaking, clusters of people move stochastically through the crowd, giant grins plastered across their faces.

The intimate dancefloor is a jungle of happy noise complemented by a vibrant array of color and texture. Metallic mesh, feathers, sequins and sneakers: apart from on the DJs themselves, there’s hardly a scrap of black clothing to be found. By the time French trio Apollonia take to the decks a few hours into the early morning, the party is primed for fun.

“We’re bringing the joy back, keeping it fun while still playing credible underground music,” Seb — one of HOUSEKEEPING’s four members — tells us over coffee the following day. Made up of two Brits, a Swede and an American — Sebastian MDH, Jacobi, Carl Waxberg and Taylor HK, respectively — the group represents the fundamental way people from different parts of the world connect over dance music. Simply put, they’re in it to have a good time and share the love. "We try not to take ourselves too seriously. Part of the [tech-house and techno] scene is really moody... you want to have fun when you go out, and we try to bring a positive energy to it,” adds Carl. 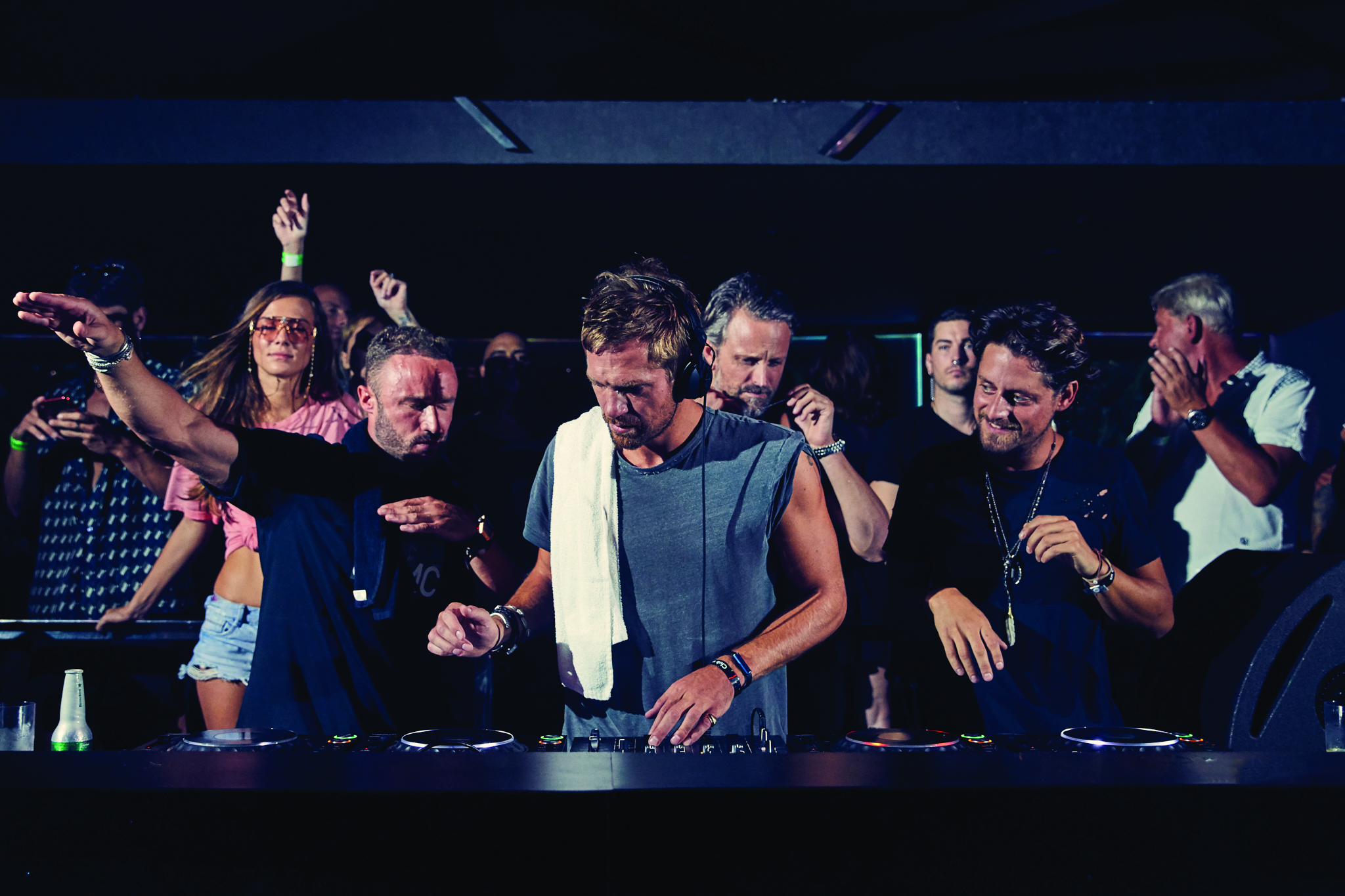 That the dance music scene has somehow lost part of the joy so inherent in it is a fair observation, especially when considering the underground, which has continued to segregate itself from the garish fluorescence of mainstream EDM by becoming darker and heavier. Unwritten rules ranging from attire (go bleak, not bold), to production choices (brooding basslines, not bongos) and even set selection (long breaks, less vocals) have become the status quo, and pushed the house and techno scenes into their own narrow boxes. And while there are an assortment of DJs and event groups across the globe, perhaps most notably in the US, working to dismantle such self-imposed restrictions, the schism remains a reality. HOUSEKEEPING's sole American member, Taylor, points out that, "a big part of the scene these days is just not that joyful. It's very cool and dark, and underground for underground for underground's sake. But not necessarily fun." That's where they come in.

The group's Facebook page describes their parties as "deep, funky, soulful tech and techno events". Indeed, HOUSEKEEPING's signature blend of tribal groove and techy percussion feels very much the perfect complement to the vibe of South African superstar DJ/producer Black Coffee, and so their 2018 residency at Hï Ibiza alongside him should come as no surprise. Keeping the terrace of that cavernous venue full while a larger-than-life artist commandeers the main room is no small feat, but when DJ Mag roll up to the show on a busy Saturday night, less than 24 hours after the dizzying cave party, we find a celebration in full swing in both rooms.

Part of their appeal is likely born from the fact that HOUSEKEEPING didn’t start out as DJ/producers. Their objective has always been to curate a party environment full of joy, where the setting and pleasure of attendees come first and foremost, before any big name headliners. As a group of friends living in London, the guys bonded 10 years ago over a love of house music, and lamented the lack of accessible, high quality underground parties in London’s West End at the time. “It was missing the vibe that you had in a place like Ibiza,” Seb says. The group wanted to replicate both the music and the energy they were so drawn to, in the city where they all worked regular day jobs. From that intention, HOUSEKEEPING was born as a party concept where the four friends hosted their own nights so that they could decorate the venues as they pleased and play the music they wanted to play. “Rather than spending money on a bunch of big-name DJs, we spent the money on production, sound and service, and just DJed ourselves."

HOUSEKEEPING hosted their first few forays at a 350-person capacity West End club Jacobi owned, called Le Baron, and promptly outgrew the space. They quickly moved the party to London's non-club venues with capacity in the thousands, bringing in their own production and sound.

It was a risky move, but one that has clearly paid off. Their loyal following has since sprawled across London, Europe, and even into the Americas. From launching their own label, Housekeeping Records, and hosting sold-out parties at London concert venue KOKO, to their 2018 residency at Hï Ibiza with Black Coffee, gigs in Mykonos, Paris, Marbella, and a standout show with techno titans Pan-Pot at fabric, HOUSEKEEPING are keeping busy. A tour through South America earlier this year was followed by the group’s first foray into North America, with stops at DC’s Flash Factory alongside Guy Gerber and in Miami with Andhim and Art Department, and they assure us they’re suiting up for more dates in the States in the coming year. “It’s the perfect time to bring it to the US,” Seb insists of their party brand, “because you’ve got this resurgence of house music in New York, you’ve got loads of underground artists at Winter Music Conference in Miami, you’ve got Burning Man, which has just boomed over the last five years... a lot more people have been exposed to this kind of music and are coming to understand it.”

Ultimately, what stands out above all else as we tag along with HOUSEKEEPING from party to party on a regular summer weekend in Ibiza is the relaxed lack of self-awarness that accompanies the crowds around them. It's refreshing, and exactly what the scene needs, both overseas and in the US. After all, house music was created right here in North America by a subculture looking for an expressive outlet and freedom from social repression; it was always supposed to be about fun and wild escape, about losing yourself without caring, and about loving your neighbour — or fellow dancer, as it were — no matter their race, gender or class. As the scene returns home to its roots, we can't help but hope that more groups like this one show up to play. We'll take unbridled joy and ribbons of color over hyper-exclusive melancholy all day.