Isolée: How I Play Live | DJMag.com Skip to main content

Isolée: How I Play Live

We examine the German producer's approach to live performance...

While the German producer's discography meandered through minimal house and techno, electronica and ambient, Isolée was simultaneously perfecting his live show, translating his studio prowess to the stage and booth. We spoke to him about how his live setup evolved, his approach to performance and why he envies DJs.

What made you want to play live beyond just DJing?
“I don't DJ at all. I couldn't imagine playing live in the beginning either since I considered myself more of a studio guy creating electronic music by programming, experimenting, layering, mixing for hours or days until a track is finished. It's a slow process of building some sort of acoustic illusion – something that is impossible to be reproduced in a live situation. The concept of 'live' was something I had to find the right concept and tools for and prepare files in the right way.

“I always considered DJing and producing as very different occupations, passions and talents and somehow I wonder why it is seen as common sense that people always do both. A great DJ is not necessarily a great producer and vice versa, in my opinion. To me, besides technical skills, a DJ is someone who has a passion for spending a big amount of time digging for new and old music and enjoying playing this to other people. Someone making music might spend this time creating music instead of having the patience and time to search for other people’s music, just as an example.

“DJing is very tempting to me for its freedom of choice, but I never really [made] the effort to learn it and I always felt like I don't collect enough club music to be a proper DJ.”

What were the biggest challenges in putting your live show together?
“The biggest challenge in playing live for me is to reproduce the music that I already spent so much time on producing. A big part of this is more of an emotional and psychological challenge, which means you have to put yourself in the right state of mind. Concerning the more technical side, I would put it this way: producing a track [live] like [I do] in a studio in a real-time situation is impossible for me because my way of working is too complex and much too slow. On the other side, playing a finished track would just be too simple. So you have to find a way in-between, which means you a have to reduce all the parts and channels in a track to a reasonable amount, do some mix downs and simplify the whole project to a point that you can handle and play around with in a live situation. Then you have a good compromise of an intervention [with] the music, without having to create it from scratch.” 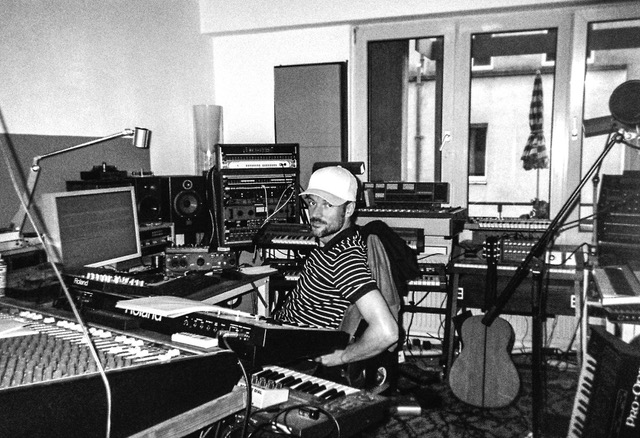 What does your setup consist of?
“My setup these days consists of a laptop with Ableton Live, an audio interface with eight outputs that I go into a small analogue mixer with. Two MIDI controllers – [Akai] MIDImix and a [Novation] Launchpad – to control Ableton, an external delay pedal and an external reverb pedal to loop into the mixer and a [Roland] TR-8 drum machine.”

What would you change about the setup if you could?
“I wish there would be a good portable 12-channel analogue line mixer with an integrated eight-channel digital-to-analogue converter. Most of the small mixers have only stereo analogue digital converters. I'd also like the idea of getting rid of the laptop, but so far I didn't find a way since it's the central part of putting the music together."

What are the creative limitations of playing live? Would you recommend alternating between DJing and live to keep things fresh?
“My limitation is my repertoire. I only have a limited amount of parts, tracks and music that I can play and it doesn't fit in all situations. This is due to my way of making music. Other producers that are more into jamming and improvising with machines might not have these limitations. I think when jamming around, the result would be less interesting in my case. Jamming and improvising is great to create new takes and initiate unpredictable soundscapes, but the problem is, in a one-hour jam sometimes only five minutes are interesting to me. So you will have to edit it, put it into the next context, etc."

“I somehow envy DJs for having an unlimited choice of music that they don't have such a personal relation to. If someone is a great DJ, I don't see a reason for him to do live-sets. It appears to me, that DJing offers bigger freedom in the choice of music and less technical challenges. If you are more of a producer-person and don't like to spend hours searching for music, playing live might be the better option. In my experience, I only know of people mainly doing one {or the other]. I think practice and routine in one [instead of] both is probably more helpful than alternating. It's good to be a specialist.”

Does a dancefloor feel or appreciate the effort that goes into a ‘live’ set in your opinion?
“Sometimes it does, sometimes not. In the end, it's more about the music you play than about the way it is being played. The stage presence of a DJ or performer seems to be significant too. Many people don't really realise the difference between a live set or a DJ when you don't play a keyboard.”

What would be your advice for a producer wanting to take their music live?
“I think it's always good to keep things simple unless you have a special and more complex idea of your performance or show. But you have to handle a lot of practical issues in a club, just something banal like the space available in a DJ booth already gives you limitations.”

Isolée will be demonstrating his live show at Diynamic Festival, hosted in Amsterdam on 1st June