Skrillex has teased new music with his former band From First To Last | DJMag.com Skip to main content
Latest

Skrillex has teased new music from his former band From First To Last.

Last year, the producer – real name Sonny Moore – rejoined the emo/post-hardcore band he left back in 2007 for the release of a new single, ‘Make War’. He even joined the band on stage  for the first time in 10 years at an Emo Night in LA. He had been the frontman of the band since they formed in 1999.

Last week, Moore added a screenshot to his Instagram story of what appears to be a group chat with the other members of FFTL discussing dropping a new single ‘Surrender’ for free.

“Yea that would be dope,” responded the band’s lead vocalist and guitarist Matt Good to Moore’s suggestion. “A lot of sad kids would be really stoked haha.”

No release date has been revealed yet but, given the spontaneity of the texts, it could be tomorrow, next week or never. Keep your ears at the ready.

Last month, a similarly mysterious Instagram story showed that Skrillex was back in the studio with Boyz Noise. 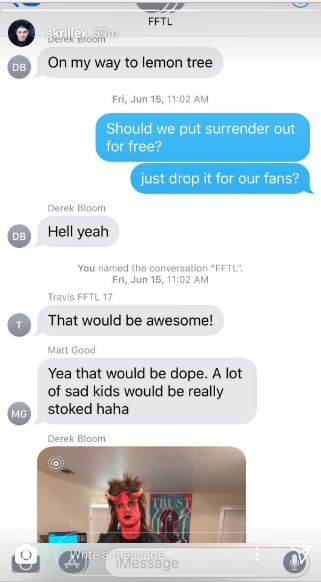 Skrillex From First to Last