As the chorus for ‘Purple Rain’ rang out of First Avenue in downtown Minneapolis on a humid August evening in 1983, no one sang along. The show was a fundraiser for the Minnesota Dance Theatre, where Prince and his band The Revolution had been quietly rehearsing for his first motion picture of the same name. The song was being performed for the first time in public, with newly recruited guitarist Wendy Melvoin strumming the chorus-smeared intro chords, aged just 19. Outside the venue, sound engineer and producer David Z sat in a recording truck filled with the newest and highest quality equipment, at Prince’s management’s request. For Prince, recording live shows was nothing new: he was constantly critiquing his and his bands’ performances. This time though, neither the group nor the engineers had any idea they were about to lay down one of the most iconic songs in pop history, on one of the most influential albums of all time. The closing trilogy of Prince’s best-selling album, ‘I Would Die 4 U’, ‘Baby I’m A Star’, and ‘Purple Rain’, were all recorded live that night.

“Prince drove up to the truck after the show and asked how it sounded,” David Z recalled, once the final chords had rung out and the crowd dispersed. “I was about to answer when a girl wearing a raincoat and nothing else stepped off the curb and flashed Prince. Then he drove away. That was pretty much our post-recording conversation.”

Although ‘1999’ and ‘Little Red Corvette’ had given a pre-Purple-One Prince some success in the U.S., he was far from the superstar household name he’d soon become. Regardless, his cocksure stubbornness was well-and-truly established, and in 1983, he issued his then- label Warner Bros an ultimatum: if they failed to land him a major movie deal — for which his next album would be the soundtrack — he’d find another label who could. Warner reluctantly bankrolled the project, and Prince enlisted sound engineer and long-time collaborator Susan Rogers to assist.
“I jumped at the chance [to work with Prince],” she said. “He wanted me to remove his home console and put it in this warehouse, which seemed a little crazy, but we managed to make it work.” 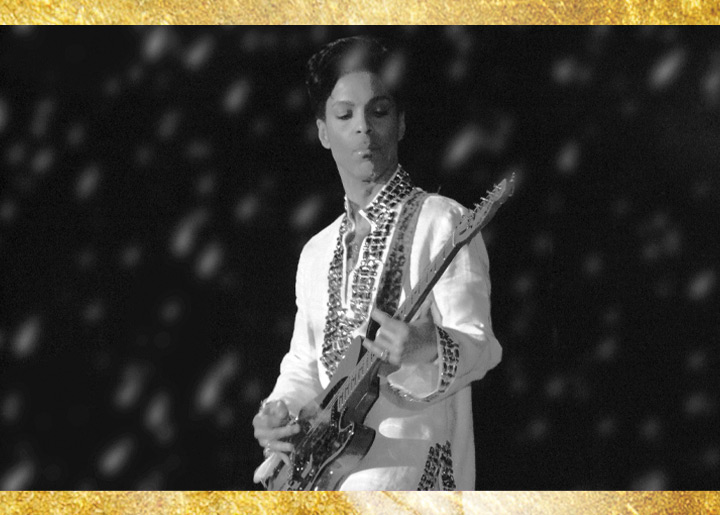 That warehouse became the central hub of the Purple Rain movie and tour, and gave some of the album its cavernous sound, specifically on the opener ‘Let’s Go Crazy’. There, Prince worked nonstop, rarely sleeping, tirelessly focused on delivering his wildly ambitious vision. Martin ‘Dr’ Fink, the keyboard player in The Revolution, recalled, “We were basically in boot camp — a disciplined regimen of dance class, acting class, and band rehearsing throughout that whole summer, for about three months straight leading up to the start of the filming process."

As the movie wrapped, just after Christmas 1983, Prince went back in the studio to finalize the soundtrack. Though the film’s live performances had all been recorded, it was still missing a song that tied together the movie and album’s central themes. On March 1, 1984, at Sunset Sound in Hollywood, he laid down a song with a distinct sonic identity, mature lyrical content and, most notably for a mainstream pop record at the time, no bassline.
“The bass is on the multi-track tape, but it was muted in the final mix,” Susan Rogers explained to TapeOp. Once Prince made the decision, he promised Rogers it would have a big impact.

“Nobody would have the balls to do this. You just wait — they’ll be freaking.” Freak they did. ‘When Doves Cry’ shot straight to number one in the summer of 1984. While ‘Doves’ was blowing up across white and black radio, and the follow-up single ‘Let’s Go Crazy’ was on its way to becoming Prince’s second number one, Purple Rain premiered at Grauman’s Chinese Theatre and raked in $7.7m in its opening weekend, eventually going on to earn $68m. Warner Bros’ risk paid off, and Prince became a verified superstar, sweeping the Grammys in 1985. Prince’s commercial success was made all the more remarkable by the fact that he had long rejected any interviews or press coverage. But he wasn’t afraid to make a pop record, as friend and collaborator Jill Jones explained.
“I don’t think Prince wanted to continue the new wave-y stuff he’d done prior, like ‘Head’ and those kinds of songs. I think he was trying to make it commercial and make a lot of money because, with money, he could do anything, and he knew that.” Renowned for playing every instrument himself, as well as producing his own records, Prince was far from a team player, but this newfound commercial awareness would force his hand when it came to collaboration. With The Revolution, particularly Lisa and Wendy, Prince let his guard down and welcomed their input and ideas, even parodying the complex relationship as part of the movie’s plot. Other band members, too, influenced the sound of the album.

“We were absolute musical equals, in the sense that Prince respected us, and allowed us to contribute to the music without any interference" — Wendy Melvoin

“We were absolute musical equals, in the sense that Prince respected us, and allowed us to contribute to the music without any interference,” Wendy told music magazine Mojo in 1997. “I think the secret to our working relationship was that we were very non- possessive about our ideas, as opposed to some other people that have worked with him. We didn’t hoard stuff and were more than willing to give him what he needed. Men are very competitive, so if somebody came up with a melody line, they would want credit for it.” Less than a year after ‘Purple Rain’ was released, eager to push forward, Prince dropped its follow-up, ‘Around The World In A Day’, instructing the label to hold back on singles until at least a month after the album’s release. It largely rejected the commercial and pop-driven sounds of ‘Purple Rain’ in favour of a more exploratory and psychedelic sonic palette, but singles ‘Raspberry Beret’ and ‘Pop Life’ did reach the top 10.

Prince’s influence on dance music though goes way beyond ‘Purple Rain’. Introduced to the Detroit masses by pioneering radio host The Electrifying Mojo, he went on to heavily influence techno godfathers Juan Atkins, Derrick May and Kevin Saunderson: The Belleville Three. In fact, so close was Prince’s relationship with the Motor City, that on his 1986 tour, he gave his only interview in five years to the radio enigma. The interview was later sampled by Moodymann on 2001’s ‘J.A.N.’ Meanwhile in Chicago, ‘When Doves Cry’ became a staple in Ron Hardy’s sets, Frankie Knuckles regularly played ‘Controversy’, while Trax Records founder Vince Lawrence released a song on its sister label Precision titled ‘Funny Love’ by an artist called Dezz 7 — a not-so-subtle reference to former Prince guitarist Dez Dickerson. Slathered in Linndrum and gated reverb effects, it’s a clear attempt to re-create Prince’s unmistakable sonic signature. The Purple One’s DIY attitude was also a huge influence in the early days of house and techno, as he turned his back on major labels, played every instrument, and continually pushed the limits of drum machine and synth technology.

But it was with ‘Purple Rain’ that Prince redefined his trajectory and took unprecedented musical, creative and commercial risks. His intense relationship with The Revolution led to a split in 1986, but their familial bond and creative competitiveness pushed both Prince and his band to new artistic heights. Although the group had no idea how they’d be credited, or if they’d be credited at all, until they saw the album sleeve, their classical, funk, R&B, pop, rock and even psychedelic influence defined ‘Purple Rain's mass appeal, and gave a depth to The Purple One many argue he would never repeat again. Drummer Bobby Z later told Billboard: “I think The Revolution was the last band Prince was really in — he was the band leader after that.”

Want more of our Solid Gold series? Read our features on Aphex Twin and Motorbass.

Prince The Purple One Solid Gold