Just when we thought we could put the rumours of a Swedish House Mafia reunion at Ultra Miami to bed, the mill is back up and running as the trio’s former lighting tech dropped a hint on Facebook over the weekend.

Mass speculation has been spreading across the Internet over the past few weeks as to who the remaining unnamed headliners are for this week’s festival, running from 23rd to 25th March. Across fan forums and platforms like Reddit, many have been dreaming of a reunion of the sorely missed EDM act. Now, the plot has thickened further as a lighting tech who has previously worked with Swedish House Mafia, Axwell, Carl Cox and Tiësto has been seen to have posted on Facebook about the trio’s imminent return. This comes less than a week after Steve Angello revealed that he wouldn’t be appearing at the festival, quashing hopes for many an eager fan.

“They are back next weekend at Ultra Miami (except for the 4th one on the left), you will have 2 tomorrow at the Pharaonic Festival Chambery”

A screenshot of the post initially appeared on an Axwell fan forum and later on Reddit. Allegedly, Bendenoun is referring to himself as “the 4th one on the left”, leaving fans scrambling to believe that this further indicates a potential Swedish House Mafia reunion at the festival. You can take a look at a screenshot of Bendenoun's post below if you like.

Anyway, Axwell & Ingrosso are headlining the festival on Friday night with or without Steve Angello and with the Resistence and A State of Trance stages boasting huge line-ups already, Ultra is set to be pretty spectacular. 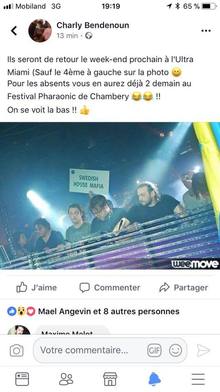 News
Swedish House Mafia are back in the studio, apparently