There’s an 87-hour techno rave taking place in a former mill in Berlin this weekend in celebration of the seventh anniversary of nightlife hotspot Griessmühle.

Housed in a former grain mill in the Neukölln borough of Berlin, Griessmühle is celebrating the special occasion with a marathon rave set to run this weekend between 18th and 22nd May (Friday through next Tuesday). Aptly called Sieben Jahre Griessmühle, which roughly translates to Seven Years Griessmühle, the four-day event features a line-up that includes Psyk, Boston 168 (live), Mistake Made, Johnny Island, Unit Moebius (live) and more, plus the venue’s residents and alumni, across the club’s two floors and garden stage.

In recent clubbing news, Stockholm is getting a new club in a 100-year-old slaughterhouse, while Amsterdam recently welcomed noorderschip, a club housed within a 50-meter-long, old pirate radio boat. Elsewhere, a disused satellite station is hosting a techno rave in Georgia this month, while Carl Cox hosts an INTEC party in a castle in Ireland this summer. Moscow techno collective Arma 17 also celebrates its 10-year anniversary with a 24-hour rave in Berlin this summer.

Before heading to Griessmühle, watch Sound of Berlin, a new documentary about the city’s techno scene and electronic music history, when it drops this Friday.

View the flyer for Sieben Jahre Griessmühle below. For more information on and tickets to the event, visit the club’s official website. 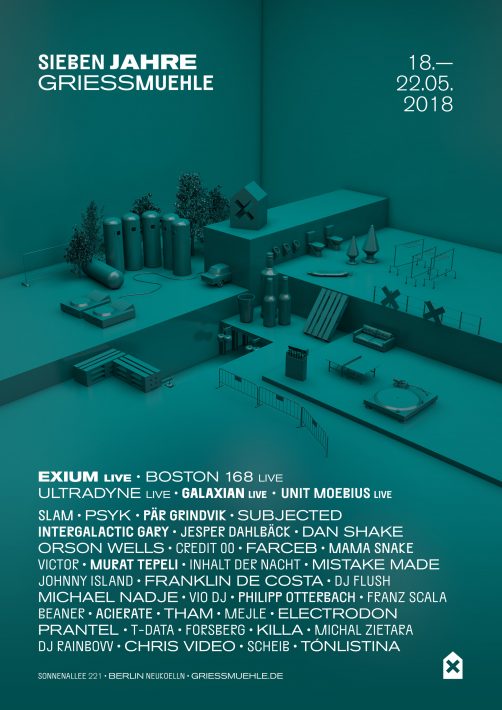