Why the Yamaha DX21 is Posthuman's go-to synth | DJMag.com Skip to main content

Why the Yamaha DX21 is Posthuman's go-to synth

The producer, DJ and label owner has been releasing acid-tinged records since 1999, but his story with the DX21 goes back even further than that. We caught up with him to find out why this synth is one of the most under-rated studio bargains out there.

"When it comes to rambling on about hardware, usually I’ll be the one chewing everyone’s ear off about the Roland TB-303 or one of its many clones – but there’s another bit of kit that has a very special place in my heart: the Yamaha DX21.

"This keyboard is the first piece of equipment I ever owned, and it’s still with me and in use today. It’s a digital FM synthesizer, part of the DX family – including the famous 'Detroit techno' DX7 – and its counterpart TX modules, all released by Yamaha in the 1980s." 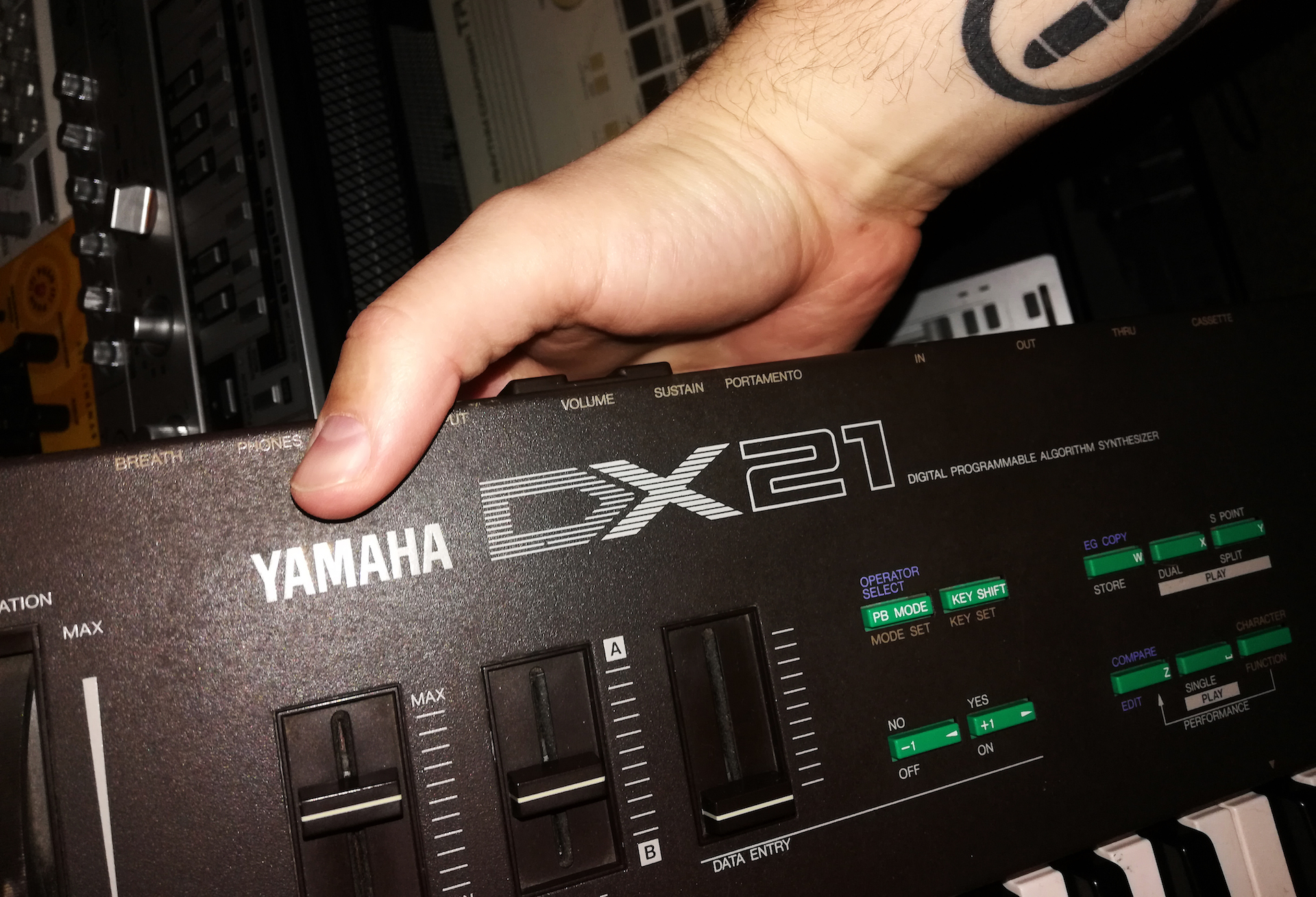 "I was given it by my dad in 1992 when I was 13. My setup [then] would be the RX21 (the DX21's matching drum machine) with the volume turned down on unused sounds, and those patches used as MIDI triggers; I’d record into a Fostex four-track. Over my teenage years I collected guitar pedals and cables and FX units. The RX21 I sold in part exchange for a Roland R8, but the DX21 never left my side."

"The sounds it makes are generally starker and cold when compared to the analogue warmth of other iconic ’80s synths from Roland and Moog. The DX21 has four operators, each can be turned on or off and manipulated with attack, sustain, decay as well as frequency, modulation etc. The synth itself can play 32 voices at once – which means eight-key polyphony on a four-operator sound, though you can’t say, do 16 keys of a sound with two operators turned off – it’s eight max. That’s the simple way I’d describe it anyway, I’m sure proper tech geeks would point out my mistakes and go into far more details.

"It’s an absolute pain in the arse to program – you have one single data slider, so each change you make has to be done one at a time – similar to the [Roland] Alpha Juno with its rotary wheel, except you can get an external editor for that. To this day I’m still not aware if a DX can be edited via MIDI SysEx."

"The DX21 is – in my opinion – a deeply underrated member of the DX series, with everyone clamouring for the DX7 and DX9 – but also the smaller-sized DX100: even though the DX21 is essentially two DX100’s put together. You can split the keyboard between two different sounds, a unique feature, and even split the sounds left and right outputs, which in my early days saved a tape bounce and gave so many more options for experimenting.

"I still have the DX21 today, and it still gets used regularly – mainly for stark, klonky noises or its amazing bass sounds – its the bouncy, rubber-band style bassline in our track Damascus but you can also get some softer, sine-wavey pads out of it too!"