Derrick May: How I Play Live | DJMag.com Skip to main content

Derrick May: How I Play Live

Derrick May is an electronic music legend. His role as part of the Belleville Three shaped how techno emerged from the Motor City while his legendary Transmat label created an incubator for the newest techno talent. While he continues to perform genre-crossing DJ sets, more recently he's been performing music from his catalogue with a full orchestra, re-creating techno classics with conductor and collaborator Dzijan Emin. We spoke to them both ahead of their show at London's Southbank Centre on August 29th to find out more about the ethos behind the concept and how the setup works.

What made you want to take your music to an orchestra?
Derrick May: "Whenever I’ve composed my music I’ve always thought about an orchestra. It was the obvious next step; it was always my plan."

What were the first steps in making it happen?
Derrick May: "I’d been thinking about it for a long time but it was my friend and producer Ognen Uzunovski‘s tenacity and determination that pushed me to finally get it done. He introduced me to Dzijan [Emin – conductor], with whom I had a fantastic relationship and with whom I connected on a creative level immediately, so that made it very easy to become a reality."

What were the main challenges in translating the music to an orchestra?
Derrick May: "Building the connection between electronic and acoustic instruments. The mentality was the challenge."

"When I’ve composed my music I’ve always thought about an orchestra. It was the obvious next step"

Dzijan Emin: Translating, orchestration, arranging, re-arranging, re-composing... writing for so many players is always a big challenge no matter what kind of music we are talking about. There are lots of aspects that need to be taken care of and the whole process needs to be seen from numerous angles and perspectives. There are many ways of how to approach it and there is not necessarily a right or wrong way.

"When Ogi [Ognen Uzunovski] announced to me that he would like to have a show with Derrick and full symphony orchestra, I was pretty impressed and also a bit scared as Ogi wanted me to score the music. As I didn’t know Derrick before I didn’t know how to start or in which direction I should take it. I was concerned about what Derrick would think, say or react, once he heard what I’d written. And I didn’t just want to literally translate all the melodies, grooves, textures… I wanted something more - hopefully, something new - while still staying faithful to the original music that Derrick composed.

"In the beginning, I started jamming to the music in my home studio and recording some of the things I liked. After a while, there were new counterpoint melodies, new rhythmical structures, new textures, and new forms came out. Then I’d start playing with the parts and out of that new ideas came up... and so on. At one point Ogi came to listen and he loved what he heard. So the only person left whose approval we needed was Derrick. He listened to 'Kaotik Harmony' and gave me a huge hug - I was so relieved and happy. He said 'How did you get into my head? This is exactly the way that I would love to hear this music.' I had a big smile for quite a while after that." 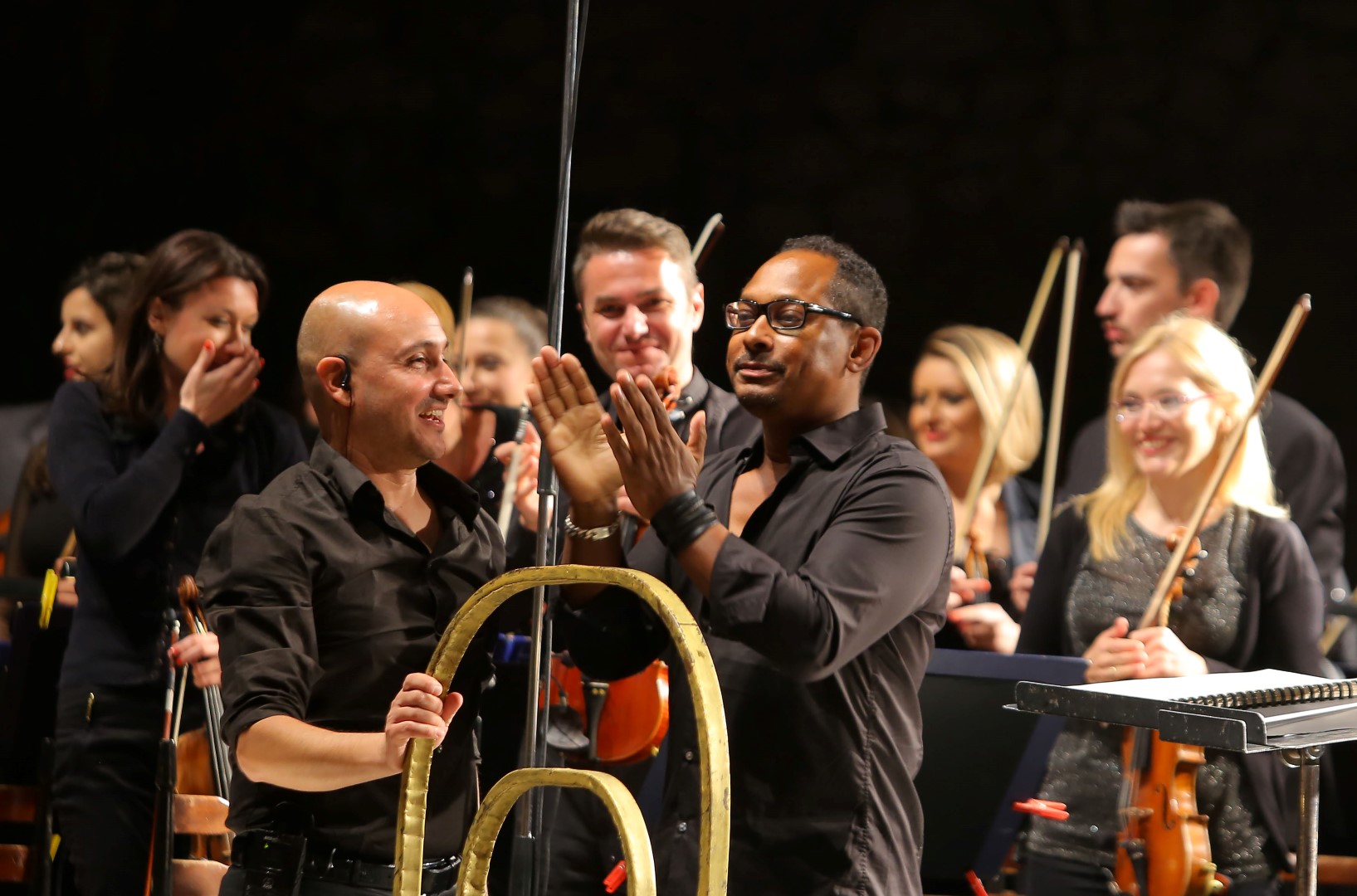 Was it a challenge for the more traditional musicians to understand the electronic aspect of the music? The quantised nature, groove, and so on?
Dzijan Emin: "I have 25 years of experience playing the french horn for the Macedonian Philharmonic Orchestra and for a classically-trained musician, it is always a big challenge to play something super tight, or to play rhythmical structures that are not common music language. For me, it is not [the] most important [thing] if the players play strictly quantised, but what matters is getting the right groove. If the classical players can swing and play like jazz players would, all the while maintaining the precision of a surgeon – that’s even more special.

"Every orchestra reacts differently depending on the artistic level and also on the diversity of programs they have performed – but so far, wherever we’ve performed, the concert musicians have always enjoyed the energy and feedback they are getting. The performances are always huge, like at a rock concert."

How much is sequenced and how much is completely live? How did you decide what elements to perform and which to sequence?
Derrick May: "The project we’ll do in London will be quite different from the others we’ve done so far. We are trying to create a more ‘open space’ with more improvisational parts in order to have the possibility to follow intuition, and blend the feeling that happens on stage with the audience. There are a few great jazz players among classical musicians and I think this will bring even more life to the project itself. There will be some parts produced by machines. The machines will do what they do best, and musicians will do what they do best. For example... you can re-create strings on a machine and it will sound pretty decent, but it still can’t replace the sound of real strings or the expression and air that comes with that sound. For the audience at the concert, they will hear a balance of electro and acoustic sounds and I hope they enjoy the blend of these two beautiful worlds."

Was it hard for you to get used to playing with such traditional musicians? Did it take some time to get used to?
Derrick May: "No, what took time for me was to get used to being on stage with 80 people giving me their undivided attention. That was emotional for me in the beginning, and it was my director Dzijan Emin who helped direct my focus and help me understand my responsibilities... because I was truly blown away by the entire event" 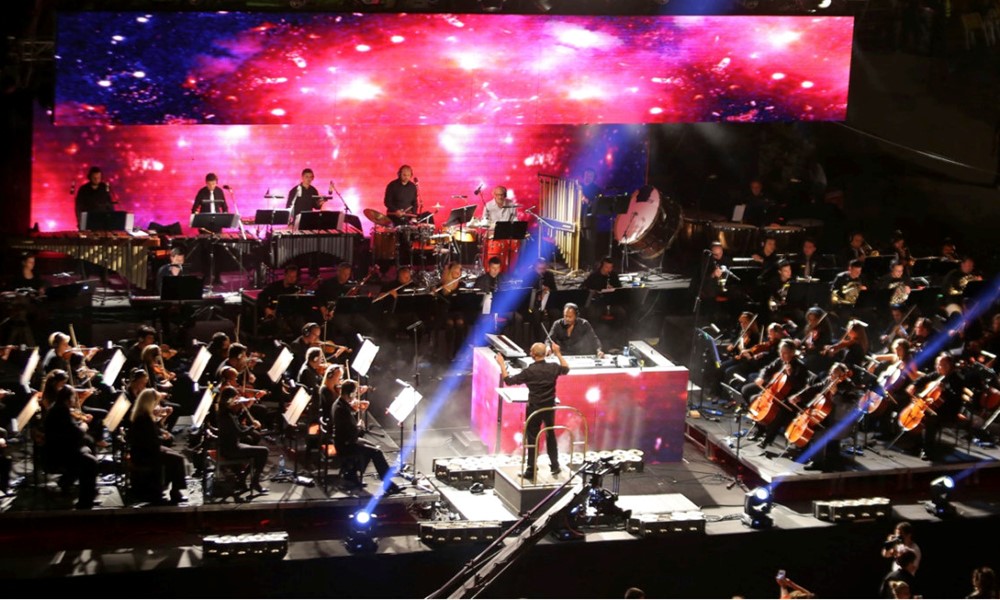 Does the whole mix get compressed and run through a more ‘electronic’ master channel to give it the ‘club’ sound? Was that important to you?
Dzijan Emin: "The whole tech setup is quite unusual. Being a conductor, I wanted to have big dynamic changes and lots of expression coming out from each soloist and orchestral group. But, when you put a microphone in front of every musician the acoustic sound changes a lot. Also if you add the electronic beats on top it is very easy to lose the acoustic feeling. The conductor takes responsibility for the whole process, you have to take care of the whole musical picture and magic happens when you perform with a classical symphony orchestra acoustically. Musicians are used to this kind of interaction. But when you have electricity involved it all changes.

"That is why I came up with the idea that I should have a mixing console in front of me so I can blend the electronic and acoustic worlds together live. This way I could easily bring in more or less of each section, soloist, groove, beat, texture... whatever is needed. It looks like there is quite a lot of work to be done on stage but also is a big challenge and somehow I have control of what is going on and it fulfils my responsibility as a conductor. And above everything, it is really fun. I always enjoy being on stage with Derrick as we have great energy together."