Giant Swan: How I Play Live

Marking the release of their debut album, we speak to Robin Stewart from beloved Bristol techno punk duo, Giant Swan, about how their live show works, and how they arrived at their unconventional setup of pedals, sequencers, drum machines and FX

Giant Swan’s live shows are a mix of dynamic performance, contagious energy and somewhat controlled chaos. As sonic aesthetics sometimes uncomfortably blend, the Bristol duo writhe and wrangle across a table of pedals, sequencers, drum machines and FX, Robin Stewart’s wildly distorted and mutated vocals often providing the epicentre of their disorientating techno. Alongside his Swan partner Harry Wright, their new, debut and self-titled album is coming this November, self-released on their new imprint KECK. We spoke to Robin Stewart about how their live show works, and how they arrived at their unconventional setup.

What was your approach when you first started putting your live setup together? What was the end goal?
“There was never a goal. We started out playing with our guitars and pedals and I'd loop some vocals and on we would drone. Regarding the set up at that time – the sound was always more important. We were literally using delay pedals to create layers in the sound – basic post-rock vocabulary ha. Initially, I think we were trying to work as freely as possible – no quantising or real syncopation or anything. As we moved towards a more regimented, rhythmic sounds, working out ways to sync our individual outputs became pretty important, particularly as we moved towards more dance-orientated music.”

What were the main challenges in putting the setup together?
“The main challenges were based predominantly in syncing to each other. When we made the move to a more machine-based method of playing together we were playing off one sample pedal with a built-in metronome and it was all wild and easy. But as soon as we started marrying machines together in the chain; like a drum machine and a sampler for example, we'd run into problems because we were so used to playing without the clock in mind. We would switch up the sound so quickly that often we'd lose people's attention, so ascribing to a more locked-in approach meant playing around with a few different techniques. We didn't know what MIDI was at this point. As we've progressed, challenges have come and gone along the way – it’s never been easy but I don't think we ever thought it would be to be honest.” 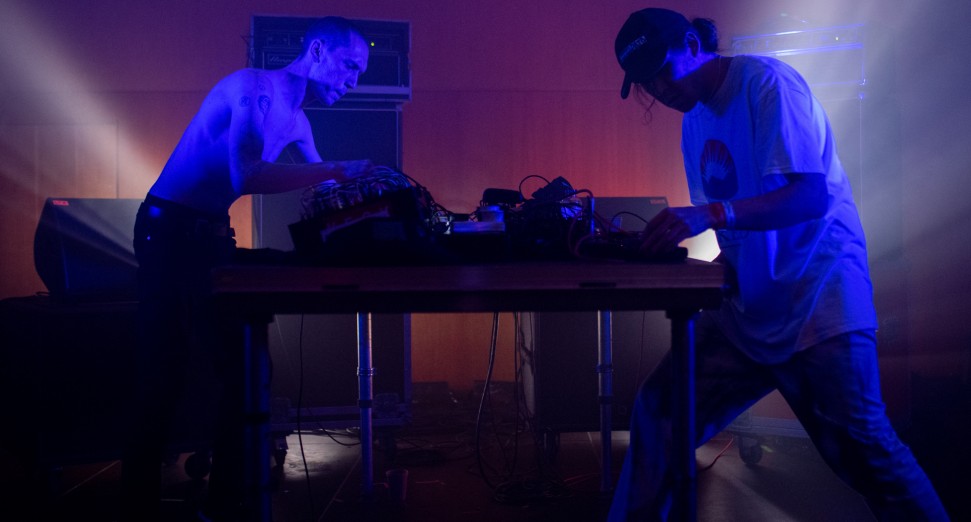 How did you decide what bits of kit to use over others?
“Trial and error really – if something works, then we tend to keep it around. We use a lot of guitar FX on most of our stuff live, and most of those pedals we've owned for over ten years from playing in The Naturals. Like, I can't remember the last time I bought a new pedal, ha! I've replaced the same bits a few times because some of the functionality of some of the gear, like the Line 6 DL-4 for example, is pretty integral to the Giant Swan sound. But aye, playing as many shows as we have, we quickly work out what works and what doesn't, what you really want to be using and what just hinders the ability to play quickly and with vigour. It’s not a good look to be menu diving for the whole set.”

What’s the full setup now?
“Right. Harry is using a [Korg] Volca Beats, which is essentially an 808 clone, which he plays through a phaser, a delay and a reverb unit – all Boss baby. He runs this into a sub mixer which also runs a sampler/looper through a separate channel. This goes out into a stereo DI, with headphone out into the amp. I use an Elektron Machinedrum UW MKII, which provides all my drums and samples and also sequences the modular, which I use for the voices and synthy sounds etc. I send a vocal chain through an octave pedal – EHX POG2 – a Behringer digital delay and two loopers – [Line 6] DL4 and Boss RC20 – all sent to a sub mixer. Control room out to the amp. We both play through an Ampeg 8x10 bass amp for xxxtra aural sex.”

How much of the modular is pre-patched and pre-planned? Or is it always a modular jam, with no prior plan?
“I used to carry a 6U case around, which was too tight to close the lid with all the cables patched in, in a tote bag, and had to patch and re-patch for every show, which was knackering [Laughs]. Now I travel with the system patched so that I can set up the gates and clocks when we soundcheck and can then just jam with it every time. Nothing is pre-planned.”

What are the key modules in your modular setup and how do you use them?
“To be honest, they're all pretty key. My system isn't hugely adventurous and I use everything in it. I really like using the Maleko Voltage Block to CV bits; tickling a filter cutoff with a six-over-eight sequence length throws some really interesting rhythms into the mix. The Bastl Little Nerd is a really good clock divider/gate processor that really enabled me to create interesting sequential interplay between what is essentially a 16-step MIDI sequence being sent to the entire system. Little Nerd enables me to divide the number of steps being spat out by three different voices, which allows for some really fun and unpredictable patterns. Other than that, I'm really into FM drum synthesis and ALM Akemie's Taiko is currently the one I go to for any number of evocative techno dinks and donks. The Noise Engineering range is also pretty untouchable for those crazy acid/metallic injections.” 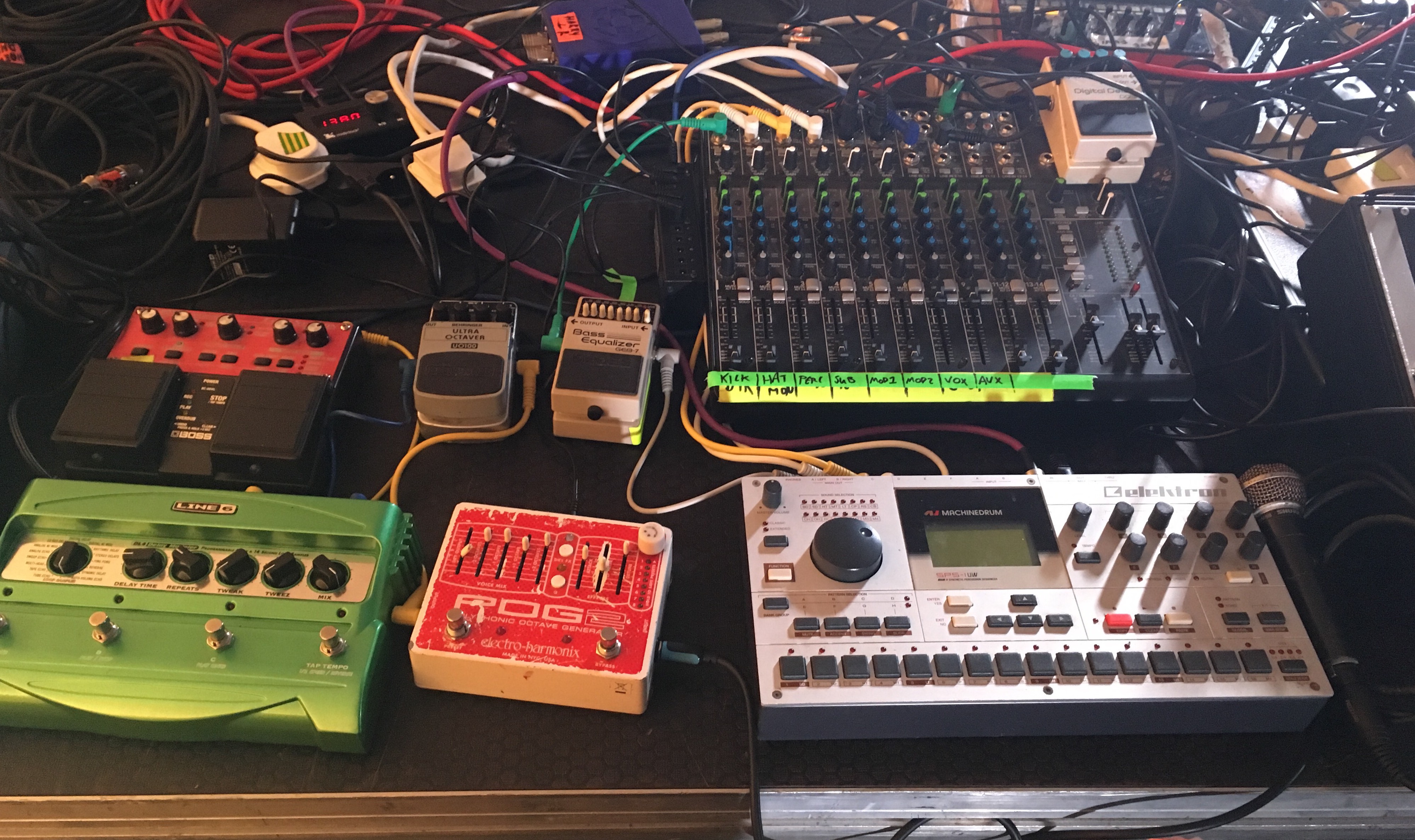 "When you know how powerful the combination of your set up can be, to hear it not translate properly through a rig can be very frustrating"

How much improvisation is there generally? Did you specifically choose equipment that allowed you to improvise over more rigid sequenced setup? Which do you prefer?
“The set is entirely improvised and it always has been. The equipment we choose/have chosen has more often than not just been the gear we've had at the time. Elements like the voice/vocals are perfect to present totally unabridged and unadulterated content into the mix and really, we kinda base the whole set off what the vocals can do. Like, it’s my voice, so I can make any number of sounds, loop them and set an aural precedent. Moreover, we actually enjoy playing off the sequencer – like, it’s music for dancing and playing off a grid kind of alleviates the need to think too much. It’s the same notion as dancing to techno – you just let your body connect with the most enticing parts of the overall beat and add colour where you feel it is needed.”

Tell us about your vocals – what’s the FX chain and how has it developed over time?
“It’s actually the most simplified and streamlined chain I've ever used. It's octave and delay looped and then looped again. I use the Line 6 DL-4 to loop and trigger samples made on the fly which is ostensibly the original 'sound' of GS. We've always threaded the vocal element into whatever kind of music we've made. The vocal set-up has been the most changeable element of the live set-up – it’s gone through so many iterations. I used to carry a multi-band guitar filter, a Moog Ring Modulator, a tremolo and a distortion, all for vocals. It was too much.” [Laughs]

How does the setup differ from your studio or is it a similar type of setup and ethos when making music?
“I don't think we've recorded with the live set-up for several years now... Harry doesn't tend to get his gear out of his case when he's at home to be honest. I record drum machine and modular stuff in the studio, but to be honest it’s all a mish-mash when we aren't playing live. Like, we don't really write music together on the whole, it’s more about coming together to mix down ideas we make on our own. With or without hardware.”

How would you change the setup if you could?
“Something under 23kg would be great. Maybe cover everything in Subbuteo grass as well?” [Laughs]

What are the challenges of playing ‘live’ electronic music in a club environment? Do people on the dance floor appreciate the live nature of the show?
“Aye people tend to appreciate what we do. I mean, they either have opinions on our equipment and how we use it, or they're enthusiastic about the fact that we use it. There's a strong community of nerds the world over who give a lot of space to live music in the clubs which is really sweet. Challenges are usually found in the soundsystems – like, they gotta be able to push the sound around properly. It’s frustrating when you know how powerful the combination of your set up can be, to hear it not translate properly through a rig can be very frustrating. but at the end of the day, we're there to perform. We facilitate ourselves to be able to turn on a hairpin and adapt to a lot of scenarios during the set. it helps if an overzealous sound engineer hasn't compressed the living pish out of the rig, but most of the time we're able to express ourselves with confidence, which is nice, innit.”