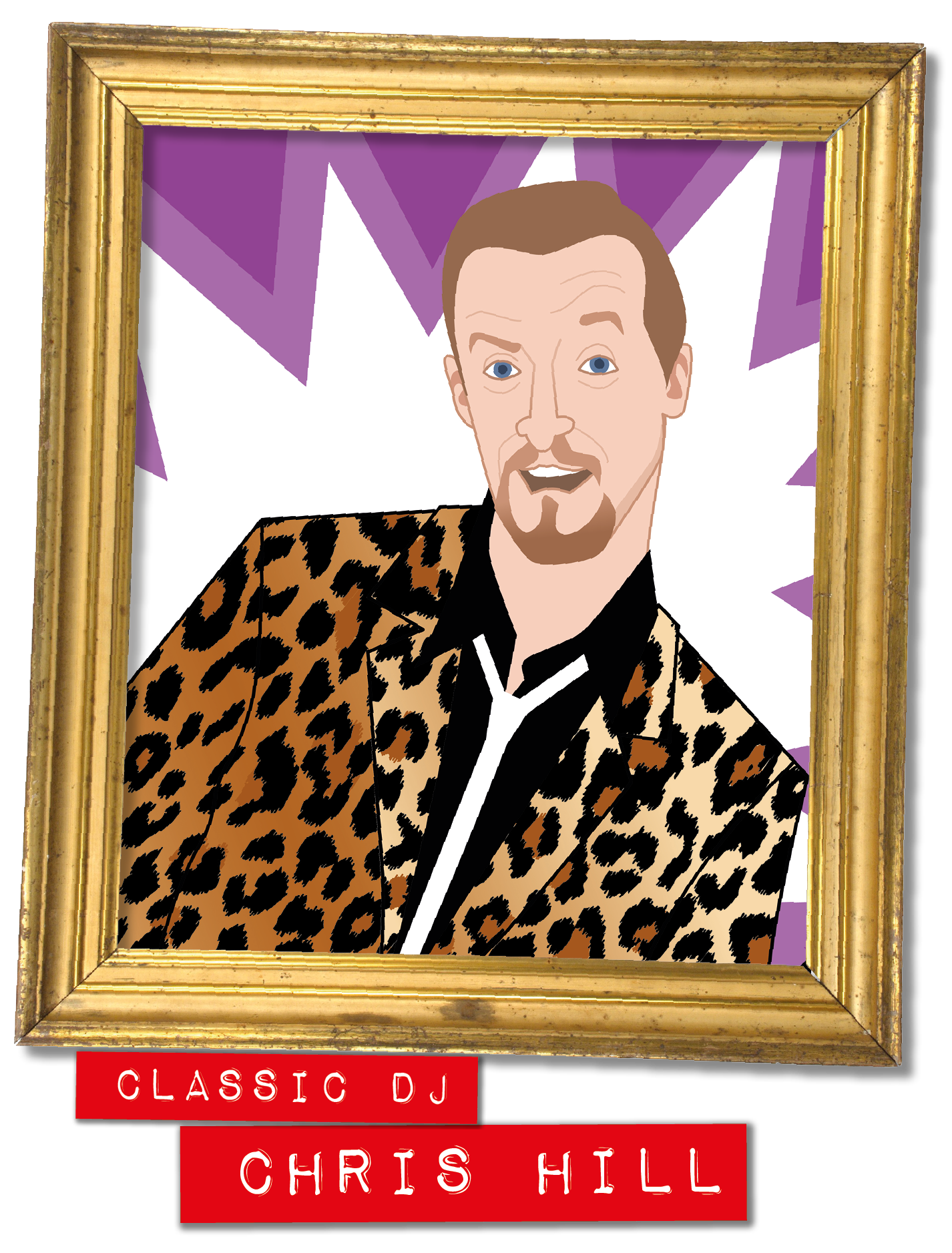 Very much a showman, Hill’s DJ style was microphone based - singing along with the records, leading call and response and generally utilizing his gift of the gab. At the same time he was a black music aficionado who, via his love of the latest soul, funk and jazz would be instrumental in breaking many artists here. This was an irresistible combination at the time, elevating him to the peak of his profession.

First emerging in the late ‘60s at Essex pub the Orsett Cock, things really took off with Hill’s much-celebrated ‘70s residency at Canvey Island’s Goldmine, an unlikely soul music oasis situated between London and Southend on the River Thames.  A further residency at Ilford’s Lacy Lady, a key gathering place for London’s growing legions of fashion-conscious suburban soulboys, cemented his status at the cusp of the south’s flourishing jazz-funk scene.

All-Dayers featuring the Mafia line-up brought the movement to an ever-wider audience, both white and black - the ante further raised with the 3 day Caister Soul Weekender, the first event of its kind, commencing in 1979 and still going strong almost 40 years on.

The Weekender was responsible for the advent of ‘tribes’. These were groupings of people representing their various areas, complete with their own banners and t-shirts, competing in ever-sillier games whilst Hill whipped them into a fervour. Although the music remained largely cutting-edge, footage of Hill behind the decks illustrates a bygone time, the more cheesy antics of the tribes causing some to wrongly ignore the scene’s full significance.

The Mafia lost its footing resisting the new electro direction that ushered the next phase. With mixing beginning to make a greater impact with British DJs, Hill’s microphone style seemed increasingly outdated. In the mid-‘80s he stopped DJing to focus on running Ensign Records (Boomtown Rats, Light Of The World, The Waterboys, Sinéad O’Connor etc.), which he’d set up in the late ‘70s with Nigel Grainge (Hill had previously recorded two top 10 novelty hits, compiled from other records in the ‘break-in’ style of American Dickie Goodman – 1975’s ‘Renta Santa’ and the following year’s ‘Bionic Santa’).

He returned to the turntables in the mid-‘90s and continues to play at the Caister Soul weekender, now the longest running event of its type in the world, his ‘finale’ slot the climax of the event. 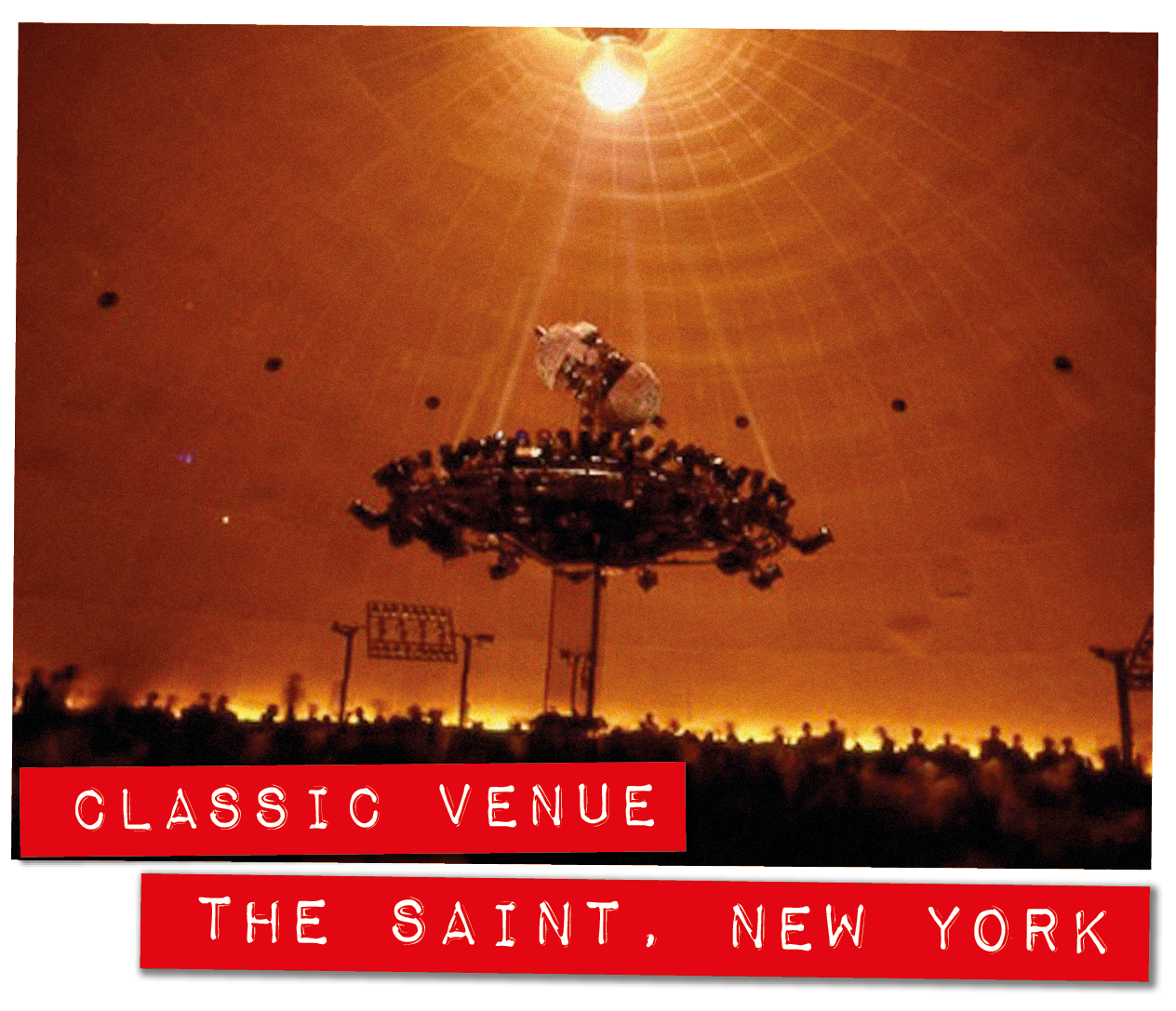 Located in the same building that had housed the legendary rock venue, Fillmore East, New York’s Lower East Side megaclub, The Saint, opened in September 1980. It was like nothing that had come before it – a huge dance arena that held 2,800 people, complete with its own ‘planetarium’! It had been influenced by Manhattan gay clubs, Flamingo and 12 West, which had set the agenda in the ‘70s, as well as the Fire Island scene, a magnet for wealthy homosexuals, but The Saint would take things to a whole new spectacular level.

The brainchild of Bruce Mailman and Charles Terrell, The Saint was set up as a private party, the club operating a membership system with a hefty outlay necessary before you could even get in, giving the venue an exclusive aura despite its huge capacity. In contrast to the Paradise Garage, which was popular with the black gay community, The Saint’s membership was overwhelmingly made up of more affluent white males, a crowd that Garage owner Michael Brody had previously, rather controversially, tried to attract.

Musically, whilst the Garage embraced the new eclectic dance directions New York threw up during the early ‘80s, The Saint stuck mainly to a disco/eurodisco template, helping to evolve the hi-energy direction the gay scene would follow. Whereas the pace was frantic during the clubs peak hours, after 6.00am the tempo of the music dropped radically - this part of the playlist was termed ‘morning music’ or ‘sleaze’.

Its original resident DJs were Alan Dodd, headhunted from 12 West, Roy Thode, who’d first made his name at Fire Island’s Ice Palace, tragically committing suicide in 1982 when The Saint was at its peak, and pioneering remix specialist Jim Burgess. Other notable residents included Robbie Leslie, who like Thode had cut his teeth on Fire Island, at The Sandpiper, prior to a spell at 12 West, and Sharon White, not only one of the few women in the club but one of the few black people.

With the venues futuristic infrastructure setting it apart, The Saint dominated New York’s gay scene - the demise of Flamingo and 12 West illustrating this new dawn. However, an unexpected horror was just around the corner, attendees of club beginning to fall ill and die as the AIDS virus wreaked its terrible toll. Such was the association with this devastation that, before the term AIDS had come into circulation it was referred to as ‘Saint’s disease’.

The club limped on until 1988, but with so much death and dismay, things were never going to be the same as in its halcyon early years. 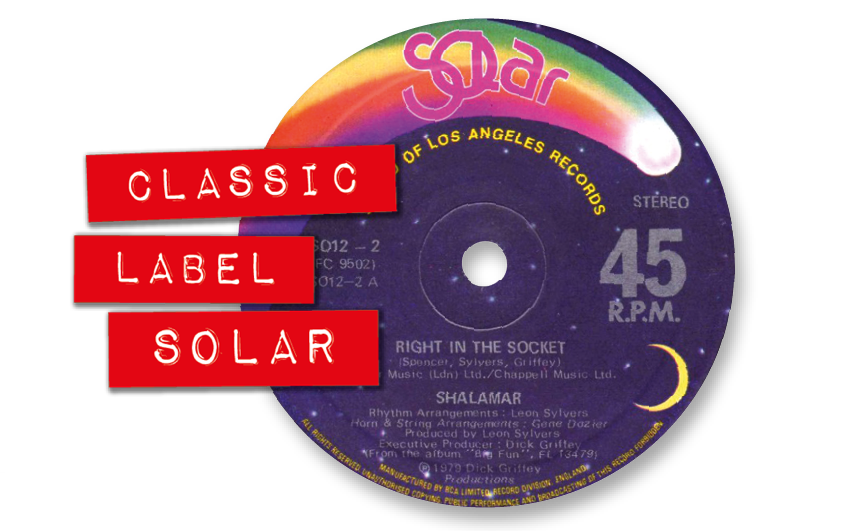 Griffey was the talent coordinator for Don Cornelius’ famous Soul Train TV show. Originally broadcast from Cornelius’ home city of Chicago, operations moved to LA in 1971. Soul Train would feature the biggest names in black music and, although it would run until 2006, its classic era was very much the ‘70s.

In 1975 the pair formed Soul Train Records, which initially failed to make a mark. That was until 1976 when Shalamar, then a studio project rather than a group as such, released ‘Uptown Festival’, a disco medley of ‘60s Motown hits, which reached both the US and UK top 30.

Despite this, Cornelius decided to concentrate on his TV show, so the label was folded and Griffey set up SOLAR from the ashes, taking most of the acts along. Shalamar became a group in its own right, featuring Soul Train dancers Jeffery Daniel and Jody Watley. Following on from Gary Mumford and Gerald Brown, Howard Hewitt joined as lead singer in 1978 to complete the classic Shalamar line-up, and with producer Leon Sylvers III at the controls, the ‘SOLAR Sound’ really hit its stride, 1979-1982 being particularly fertile with singles including ‘The Second Time Around’, ‘Right In The Socket’, ‘I Owe You One’ and ‘A Night To Remember’, whilst other SOLAR favourites included ‘And The Beat Goes On’ and ‘It’s A Love Thing’ by The Whispers, Dynasty’s ‘I Don’t Want To Be A Freak (But I Can’t Help Myself)’ and ‘Dance With You’ by Carrie Lucas.

Having consolidated their popularity in the UK, Shalamar’s Jeffrey Daniel would famously showcase body popping here when he danced to ‘A Night To Remember’ on Top Of The Pops in June ‘82, memorably demonstrating ‘the backslide’, which was later popularized as ‘the moonwalk’ by Michael Jackson, who Daniel would work with as co-choreographer on various projects.

In addition to club play, the labels output would also be perfectly paced for roller discos, popular in the US during the late ‘70s/’80s, with New York DJ Danny Krivit recalling ‘the ideal things at the time for roller skating was that whole trend of music that was kind of around the SOLAR sound’.

SOLAR would continue until 1992, releasing tracks by artists including Midnight Star, Lakeside, Klymaxx and Babyface, and even having a hand in the emergence of Dr Dre and Snoop Dogg - Death Row Records setting up in in Griffey’s SOLAR HQ. 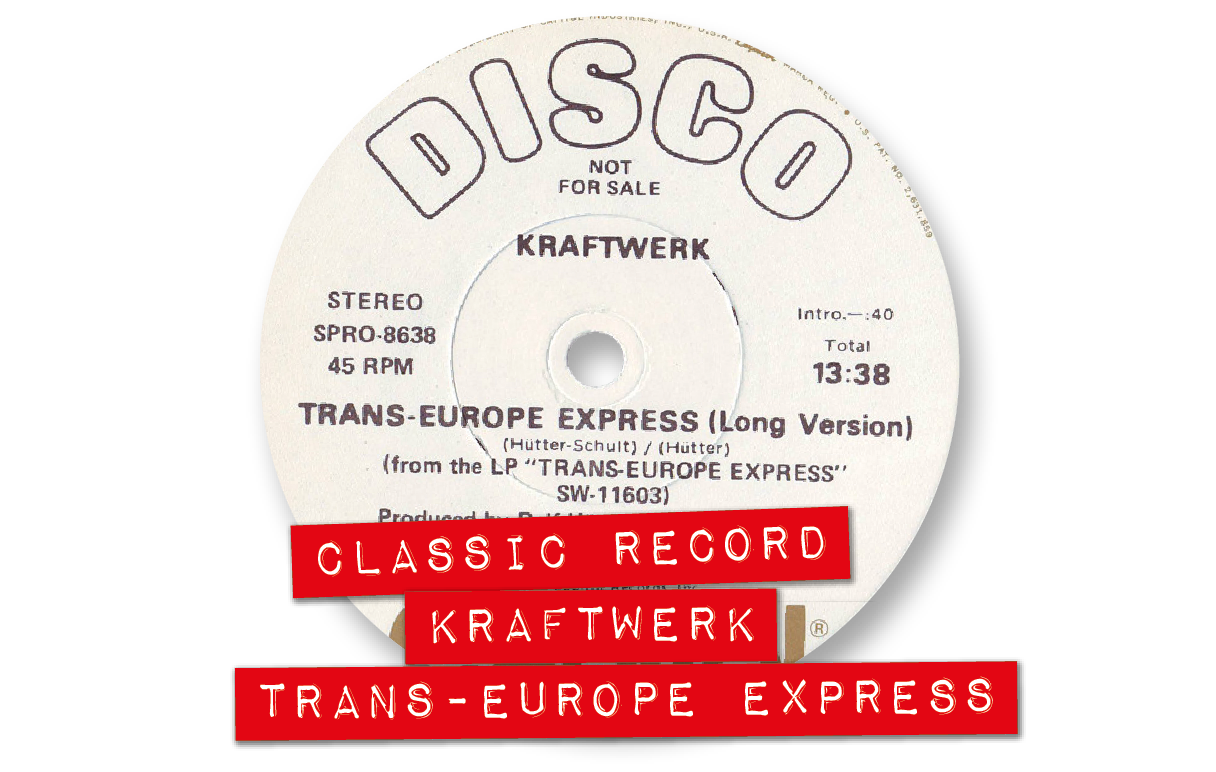 With electronic musical equipment increasingly available as the ‘70s unfolded, you can credit a German group with bringing the possibilities provided by the futuristic marriage of drum machine and synthesizer into greater focus, triggering a technological revolution in the recordings of the following decade.

Konrad ‘Conny’ Plank played a key role in their early years, co-producing Kraftwerk’s first four albums alongside Hütter and Schneider in his Cologne studio, which hosted the great and the good of Germany’s ‘70s music scene, including Can, Neu! and Harmonia.

‘Autobahn’ (1974), Kraftwerk’s final album with Plank, saw the band depart from their earlier sound. With investment in new kit like the Minimoog and the EMS Synthi AKS, the album saw the band reach an international audience. Hütter and Schneider brought Wolfgang Flur and Karl Bartos along for tour dates, both playing electronic percussion - this line-up would remain unchanged over the next two albums.

Their ‘Radio-Activity’ LP followed in 1975, but it was ‘77’s ‘Trans-Europe Express’, specifically its title track, that took their music to the dance floor, although, only at this point on an underground level. Their seventh album, ‘The Man-Machine’, arrived the following year, further inspiring a whole new wave of British musicians to put down their guitars and retire their drum kits, replacing them with synths and drum machines. David Bowie (name-checked in ‘Trans-Europe Express’, along with Iggy Pop) absorbed Kraftwerk’s influence for his acclaimed ‘Berlin Trilogy’, whilst suitably inspired synth-pop artists like the Human League, Ultravox, Orchestral Manoeuvres In The Dark and Gary Numan, would soon place electronic music firmly in the mainstream.

‘Trans-Europe Express’ was to have a profound influence across the Atlantic – having been themselves influenced by the funk of James Brown, things came full circle when Kraftwerk’s music began to appeal to young blacks via Afrika Bambaataa and his Bronx block parties, plus esoteric Detroit radio DJ, The Electrifying Mojo, resulting in the birth of New York electro, then Detroit techno. Bambaataa & The Soul Sonic Force took the track, along with another Kraftwerk classic, ‘Numbers’, as the template for a their truly seismic Arthur Baker produced future-shock ‘Planet Rock’ (1982). This seminal single lit the blue touch paper as far as electronic dance music was concerned, having a crucial bearing on how things would subsequently develop.