Minimal Violence: How I Play Live

Vancouver duo Minimal Violence's live show is an amalgamation of what defines their sound, and what they can fit in an overhead locker – with the MPC at the heart of the setup, guitar pedals coat their warbled synths and rolling drums in delay and reverb. The synth workouts from their records are translated via Elektron and Roland kit, while clones of the classics provide some acid warbles and tones. We went inside their setup to find out more about their live performance ethos.

What made you want to play live?

“When we started it was with the intention of forming a band, a duo, DJing wasn’t necessarily part of the equation at first. Ash had been DJing for a while but Minimal Violence wasn’t conceived as an extension of that really. We started to build a setup with the intention of playing live before even thinking about how we would go about writing and recording tracks. At first, it was just about jamming together and coming up with some fun ideas.”

What were the biggest challenges in putting your live show together?

“Figuring out what gear did and didn’t work in the live flow was probably one of the first challenges we encountered. For our first set we brought out our Juno 60 and DIN synced it to the [Roland] TR-606 while manually triggering samples on an SP-404 and playing a random Casio keyboard through some guitar pedals. It didn’t go well.

“Not only was it incredibly hard to get all that gear to the show but having so many different elements going on at once without some sort of brain (sequencer) at the helm was really chaotic. It took a few different tries with different setups, and different gear to figure out what worked for us. I think that bringing the MPC into the setup was a big turning point.

"Another big challenge we encountered from the start was learning flow, how to cohesively move through the set in a way that made it feel like one unified piece. I feel like that is something we are still working on – building bridges between tracks to help make things flow a bit more seamlessly, although we still intentionally employ some jarring changeovers, we consider that part of our sound.”

"We still intentionally employ some jarring changeovers, we consider that part of our sound"

How did you decide what bits of kit to use?

“Well, firstly, it has to fit into two carry-on suitcases. We’re way too paranoid to check in our gear, so we always make sure we are able to bring it with us in cabin. This also helps us not get out of control and end up with two tables’ worth of machines. There are some core pieces that we need in the setup, like the MPC and TT-303 and sounds we can’t live without like the 707. We like to have other units in there like the [Access] Virus, that we can manipulate easily on the fly. The Analog RYTM is also proving to be a really flexible machine for both drum parts and sampled bits.”

What does your setup consist of now? 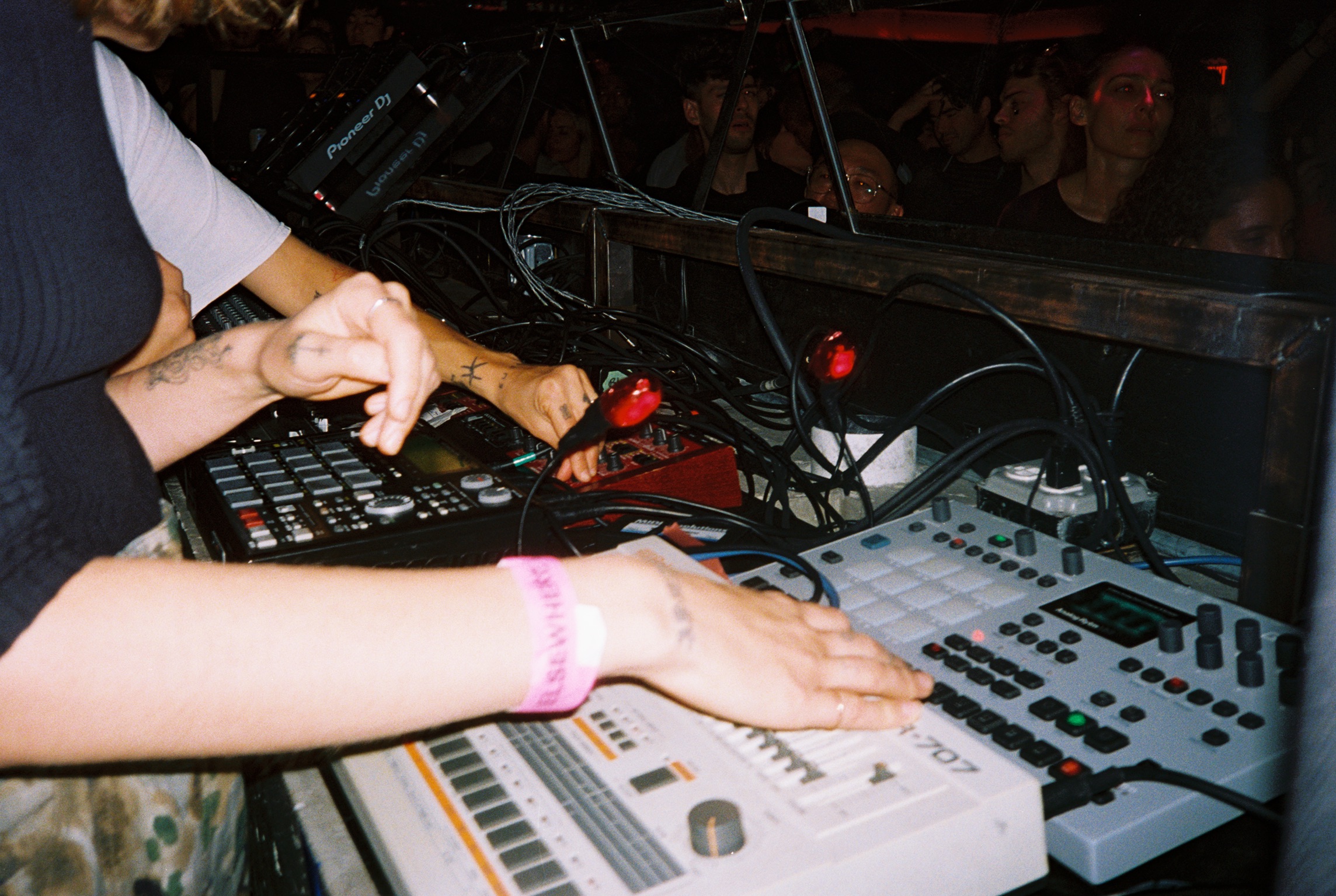 What would you change about the set-up if you could?

“We would love to bring the NAVA 909 clone back into the set-up. The problem was that it gave us a few issues live at some shows; not starting up, white noise randomly on all channels. But we did just get it serviced and update the firmware so maybe it’ll make an appearance again soon! It feels and sounds about as close to the real thing as you can get so it’s really fun to have in the set-up.

“Another thing we actually just changed is starting to bring our own mixer to shows. We have always had the venue supply mixers to us but I feel like even though we do request a specific mixer, it’s rare that we get it, and even if we do it’s likely that there are going to be some dead channels. Because of this, the majority of our soundcheck is generally spent figuring out the mixer, routing, dialling in the levels. We finally realised it would save so much hassle to just get a portable mixer and bring it out. Picked up a Mackie 1202 VLZ Pro, love that little mixer!”

What are the creative limitations of playing live?

“I don’t really think there are any creative limitations to playing live, you can literally do whatever you want however you want to do it whether that be with hardware, a computer or just your voice through a series of guitar pedals. We definitely like to do the occasional DJ set, but under the preface that we are known as a live act. I don’t necessarily think our DJ chops really hold up to the best of them but we still have fun doing it.”

Does a dancefloor feel or appreciate the effort that goes into a ‘live’ set?

“I’d like to think that there is a portion of every dance floor that does, that portion normally gravitates to the front, there is probably another portion that thinks we’re just DJing really blown out un-mastered tracks and that’s fine too. As long as they are all still dancing. We don’t expect everyone in the audience to be familiar with the prep that goes into a live set, we can only hope that at the end of the day those who didn’t come in expecting a live set are happily surprised and have a greater appreciation for the craft.” 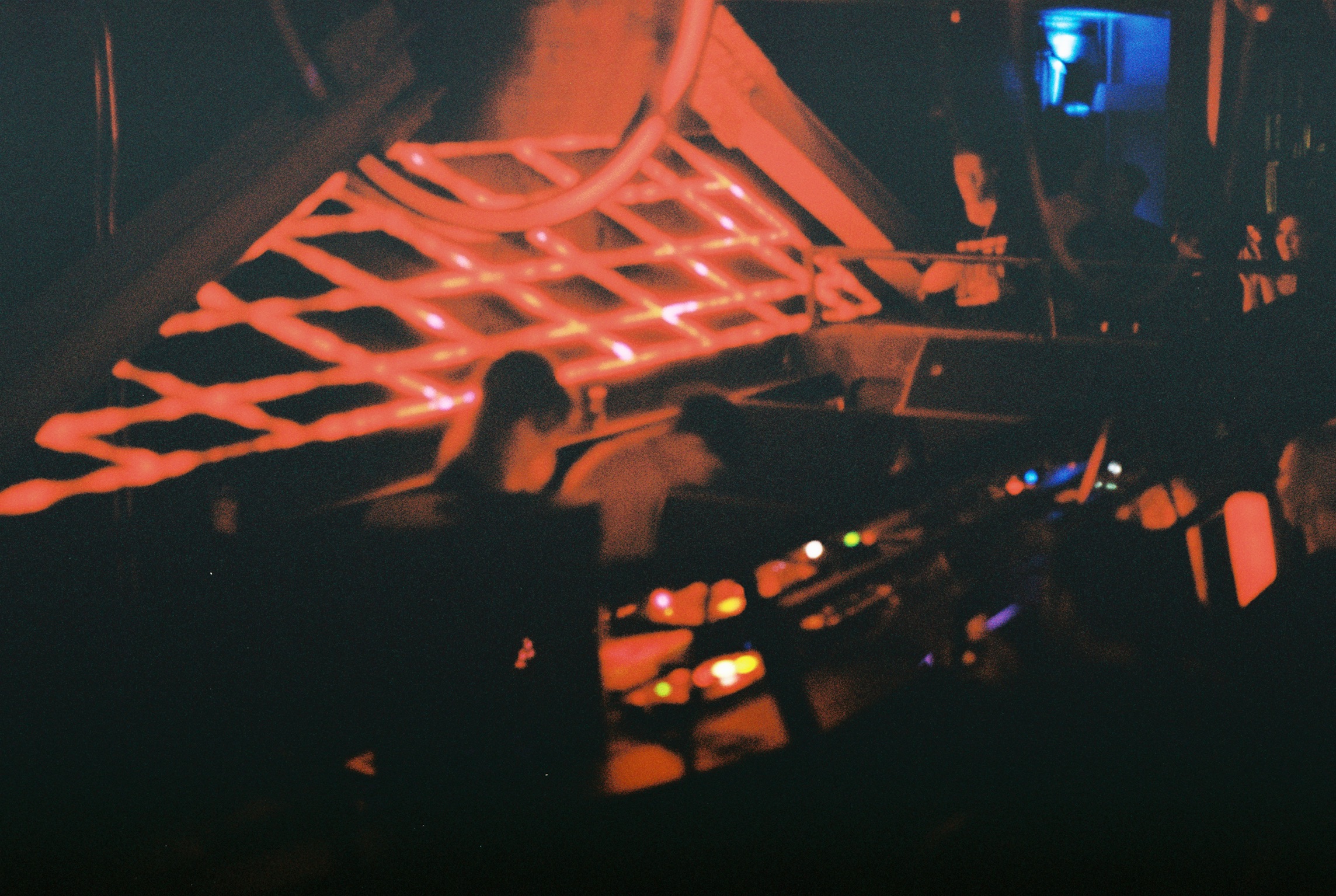 What would be your advice for a producer wanting to take their music live?

“Just do it. I really think that playing live has had a huge impact on our sound, and that being said we don’t actually know any different because we have always played live but I feel like an artist who spends all their time in the studio would benefit from breaking out of that comfort zone and performing live, making some mistakes, feeling the response of the room, it’s all an important part of the learning process.”

As the lines between what ‘live’ is – running a drum machine alongside a DJ set, or a full-blown laptop-less hardware setup – what do you think is next for performance in the club?

“Personally, we would love to work in more collaborative elements, with both visual artists and dancers. I also think there is room for more interactive performance, we always say that audience response to our live set is a big part of how we shape our sound but what if there was a way for that to literally impact the sound in real-time; like the audience was given the power to shape the sound in some way? For us, I feel like that could be a really interesting step forward in live performance.”

Want more? Listen to a hard-hitting mix and read our profile with Minimal Violence here