Four Tet has announced the line-up for his London summer all-dayer, his only extended festival appearance of the summer.

The UK DJ and producer is set to play for five hours at the open-air event, which will take place at London's Finsbury Park on Saturday 13th August. He will be joined on the main stage by Hagop Tchaparian, Josey Rebelle, and duo Two Shell.

Run in partnership with London dance music promoter Krankbrother, attendees are promised the location of "a beautiful tree-lined carriageway within Finsbury Park", alongside natural wines, craft beers, and a compulsory £1 donation from tickets, which will go to local environmental charities.

Continuing with the green approach, single-use plastics will be banned, site deliveries kept to a minimum, and tree planting projects will be undertaken by the team involved. Check out the flyer below and pick up tickets here.

Earlier this month, Four Tet teased the long-awaited release of a new track of his via Instagram, posting a clip of a turntable playing a vinyl copy of the track 'No More (Baby I'ma Do Right)', which was originally released by US group 3LW in 2000. 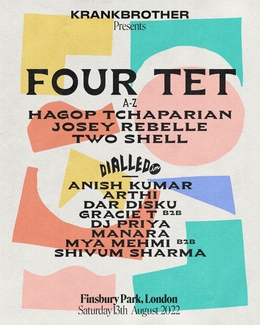 Rare items from John Peel’s archive to be auctioned