How the Moscow bass scene is tearing down the city's techno barriers | DJMag.com Skip to main content

Despite being largely ignored by the west, Moscow has had a rich bass scene for over a decade. After reaching an impasse in 2015 as techno ruled the city’s bigger dancefloors, there’s a renewed energy as 4/4’s dominance has inspired a new generation of underground artists and promoters to buck the trend...

Moscow’s bass scene has a long and trend-setting history, although it’s not had much attention in the west. A number of the city’s promoters have strived to push sounds that exist on the bleeding edge of electronic music, underscored by a desire to nurture the next generation. But a change in collective mood nearly derailed the scene earlier this decade, before a wave of new promoters decided to re-energise it through collaborative effort.

The scene first solidified when Solyanka club first opened around the mid ‘00s, with parties such as Capital Bass — which also operates as a radio and label — that focused on underground UK club sounds of the time. One of the key tastemakers from the Moscow bass scene from the beginning was DJ, promoter and journalist Masha SKYE. Educating herself by buying vinyl and playing it at a nearby DJ equipment store, she ended up presenting the Capital Bass radio show, after friends asked her to start DJing to share her record collection.

“It was all about early dubstep and the dark garage vibe back then, everything surrounding the ‘hardcore continuum'. The line-ups were really cutting edge: Capital Bass brought artists like Mala, Kode9 and Skream to Moscow right before their big hype around the globe,” she recalls.

While educating ravers with retrospectives such as UK hardcore specials, booking artists like Slipmatt and El-B of Groove Chronicles, the events progressed as new genres emerged. “When the UK funky thing exploded, Oleg 'FStep' Rozov, the mind behind Capital Bass, made parties with Cooly G and Ikonika, Roska and Jamie George, Lil Silva,” Masha SKYE continues. Revered by peers for her vinyl garage sets, she now promotes under the moniker Tiger Balms with best friend Artem Mitrokhin. Then, further mutations began, “We had showcases with Night Slugs and Fade to Mind — it was hard to label the music we were listening to; house, garage, electro, grime, techno, everything was merging.”

“Eastern European countries, including Russia, can be much more progressive, booking a wider scope of artists than big cities in the UK, as well as being more appreciative of experimental and live music” — Sofya Staune

Glasgow-based Russian DJ, visual artist and promoter Sofya Staune of bass-focused club night and booking agency FUSE by VAJ.Power agrees, while arguing that western media has seldom acknowledged these achievements. Instead, Russian club culture is fetishised, “The common thread is, ‘Wow, something does happen in Russia!’ but it’s usually a ‘crazy Russian raves’ narrative and stereotypes about drinking or drug culture. But, many Eastern European countries, including Russia, can be much more progressive, booking a wider scope of artists than big cities in the UK, as well as being more appreciative of experimental and live music. I see that as an AV artist as well — in Moscow, those who create visuals are considered a big part of the line-up and always put on posters,” she says, citing her own experience performing at raves in the Russian capital. “In that sense, I feel Moscow is quite ahead of the UK,” she argues, “but I’ve never read an article in western media where that point is clearly made.”

By 2015 though, the city’s bass scene was at an impasse. As techno took over the city’s bigger dancefloors at the same time as Russia’s youth became disaffected by political changes in the country, attention to the underground scene that had developed began to wane.

“The new rise of techno dissolved every other genre and pushed us house heads, garage heads, any other heads really, deeper underground,” Masha SKYE remembers. As club culture inevitably reflects societal shifts, the changing trends were reflective of a deepening dissatisfaction in Russian society. “The gloomy sound, black clothes, dark net — this aggravation — was obvious during 2011-2014 when we had [President Vladimir] Putin re-elected again. Then the annexation of Crimea happened and many people were marching in the streets, while others were supporting what was happening. So people started hating on each other, everyone nervous and a bit lost, some ready to leave the country,” Masha SKYE says.

According to fellow bass music promoter and DJ Moscow Legend, the emerging techno crowd were at times shortsighted, paying too little regard to what impact overt drug use would have on the wider club scene: “People take risks, but I don’t believe the audiences who visit the big techno raves truly love their culture and care about it. They just want a place where they can have fun, not thinking about the aftermath.” To this, Moscow Legend ascribes a slew of club closures, including the widely reported shutdown of the venue Rabitza in August 2017.

But the diminishing number of clubs and the increasing genre homogenisation across the venues that remained is precisely what inspired a new generation of promoters to start organising parties. And now, their hard work is paying off. Guests from abroad playing more genre inclusive venues like Pluton and Powerhouse, as well as secret location events, can’t compliment the promoters enough.

For UNITED spokesman Moscow Legend, the idea to become a promoter came to mind when garage and grime raves were reduced to small gatherings that he was going to. It was at these events that he cut his teeth as a DJ, while working in a skate shop by day. As he began to play out in clubs, his leftfield grime selections and own cuts left some audience members baffled, so in his frustration, he reached out to his influencers in the UK. “When Slimzos Recordings started doing digi releases I was first to play this mucky stuff out here,” he explains. “I made some vids tagging Slimzee and the producers who made this music, and got feedback. Then Slimzee hooked me up with a few guest mixes for his shows.”

When Moscow Legend realised there were others with a similar vision in 2017, UNITED was born, describing the coming together as “collective education”. Now the group’s events attract up to 500 people, and they’re on a mission to show Russian audiences the intricacies and history of grime. When Slimzee played for them, they subtitled and screened 2014’s Slimzee’s Going On Terrible, a short biographical film which explores grime’s beginnings on pirate radio. For his part, Slimzee continues to support the Moscow scene, releasing tracks by UNITED members Moscow Legend and Oddkut on Slimzos Recordings.

“It was really hard to imagine a full venue of happy young Russians raving to R.I.P. Productions ten years ago, but now, thanks to the emotional counter-reaction to the dominance of techno in Moscow, it’s possible” — Masha SKYE

Get High On Bass club night founder and Moscow-based electronic music label Hyperboloid Records artist A.Fruit shares a similar story. She was 19 when she began to teach herself how to produce. When she started DJing a few years later, she found that there was nowhere playing genres like juke and footwork.

“At first I started putting on events just because I wanted to listen and play it out loud somewhere,” A.Fruit recalls. Her first event, 808 Juke Street, took place in February 2015. “I then realised that there are many other genres that I like missing from Moscow club life and media,” she continues. “And I found it almost impossible to find a place where I could play the music that I was starting to produce.”

Since those tentative first steps when A.Fruit was learning Ableton, she has produced a large body of experimental bass music, most recently releasing on London’s Med School, sister-label to Hospital Records. The aptly named ‘Obsession’ EP is an eclectic moodscape that showcases her passion for genres in the 160bpm range, including her love of juke and jungle.

Now, she’s keen to share her knowledge and platform with the next generation, and in March she curated an all-female lineup for her current club night, Get High On Bass. The impact was evident straight away. “Since I started inviting more girls to play we started getting much more girls on the dancefloor as well,” she enthuses. “We had Sarah Farina from Germany and Worst Behavior’s Anna Morgan and Bell Curve from the USA – they are sick producers and DJs,” A.Fruit continues, saying the mutual support is ongoing — they recently booked her for a tour in the US.

But for all the progress made in recent months, there are still challenges. “Because there was no culture of clubs in the Soviet Union, it means that the older generation don’t understand electronic music and are not seeing us as part of the culture,” A.Fruit, who relocated to St. Petersburg in 2018, explains. “And, as there are no young people in government, most of the politicians see us as marginal, with the mindset of, ‘it’s just kids, they’re not smart,’ instead of understanding that young people may simply really love music and dancing.” 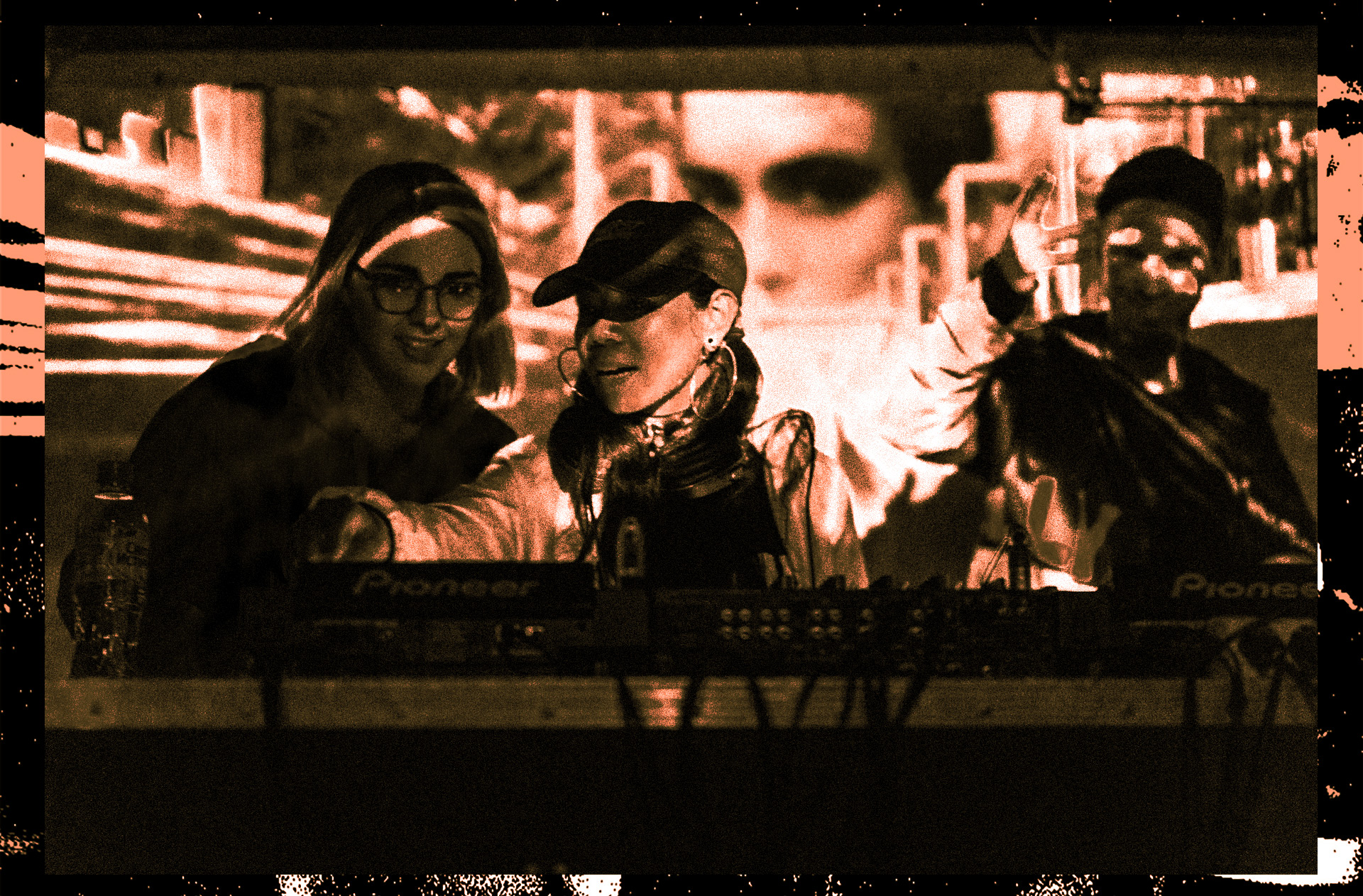 This lack of government support, coupled with the declining value of the ruble following 2014’s financial crisis and international sanctions, means promoters have been struggling with the cost of booking international acts. However, A.Fruit is keen to stress that collaboration makes things happen. “Together with the Grechafunk crew and Hyperboloid Records, we brought Shield from Denmark to St. Petersburg and Moscow, and Itoa from the UK, with Somatik Sound System,” she smiles.

“We always have support from the UNITED crew, PZDC Sound System, BIG ROBA Sound System and other Russian crews too. And, of course, it also helps when western artists offer us lighter conditions in order to support our Russian underground scene,” A.Fruit says. She adds that she hopes “somehow, in the future, rave culture will not be considered as harmful here. And we will get more spaces for creativity, more powerful sound systems and venues will survive for longer.”

Moscow Legend also wants to focus on the positives, explaining that he thinks the government’s crackdown on antisocial behaviour has, on the whole, improved nightlife in Moscow. “I was raised in the ‘90s and that was hard times,” he explains. “A lot of criminals after the USSR turned to Russia. Clubs were violent — I have a big scar on my face where someone attacked me. Now, I haven’t seen any violence in clubs for years. It’s different, the government is laying down the law and it’s working.”

For Masha SKYE, the difference is also evident in the renewed energy on the dancefloor. “It was really hard to imagine a full venue of happy young Russians raving to R.I.P. Productions ten years ago,” she says. “But now, thanks to the emotional counter-reaction to the dominance of techno in Moscow, it’s possible.”

Want more? Check out our feature on the return of jungle.