The other side of Ibiza

Coronavirus may have put a stopper on travel to the White Isle for the moment, but that doesn't mean you can't discover the pockets of Ibiza still connected to the island's spiritual roots. In a feature from the DJ Mag Ibiza archive, our digital editor, Rob McCallum, goes to the heart of the White Isle to find its hippie spirit is still very much alive

Ibiza. The island of hedonism. The global epicentre of superclubs and after-parties. Home to Privilege, Amnesia, Hï and DC-10. Increasingly overrun by tourism, VIP culture and super-yachts, it has become the stomping ground for the rich and famous. But even 30 years after the explosion of house music left an indelible mark on the island, the White Isle isn’t just about wild parties and fine dining — there still remains parts of the island devoted to ideals that both lead to and are derived from the influx of hippies in the 1960s, pockets more connected to the spiritual roots of Ibiza than the decadence of the dancefloor. It may be harder to find than club-nights with expensive PR campaigns, but look a bit deeper and you’ll be rewarded with some of the island’s best (and worst) kept secrets: the other side of Ibiza.

One of the most visited is the weekly drumming session on Benirrás beach, located a 10-minute drive from San Miguel in the north of the island. There, every Sunday from late May until early October, a group of drummers gather on the narrow, sheltered bay which is flanked by surrounding cliffs and a wooden shack on a small jetty. The sound of drums begins to drift from behind the forest line in late evening, and after the sun has set on the clear blue waters the drummers move to a dilapidated wooden structure at the deepest part of the bay.

There, they look out onto a huge rock shaped like a clenched fist pointing its index finger towards the sky known as Cap Bernat — or The Devil’s Finger or The Finger of God locally, dependent on who you speak to. Crowds are generally packed into the corner of the beach, pushing back into the water, all centred around the bonfire, which illuminates the drummers’ faces while they play into the night as the hazy moon slowly sets on the sea. 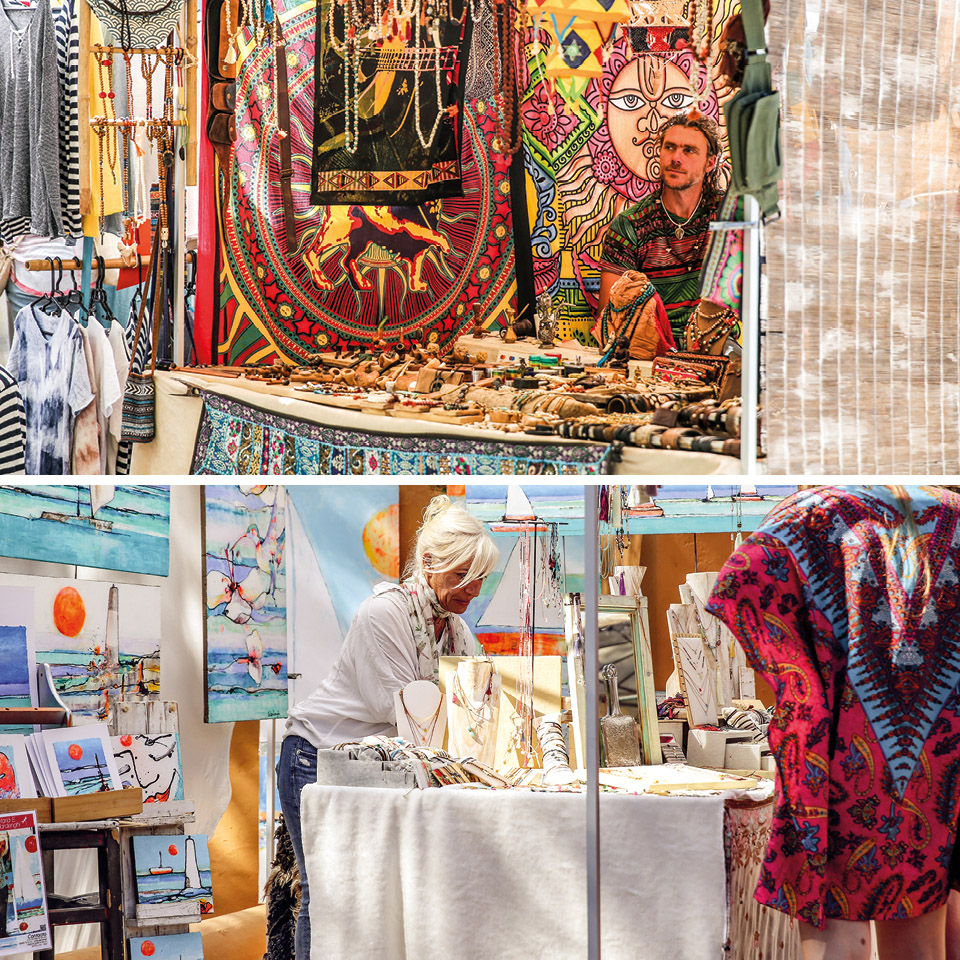 There are three main hippie markets on the island. Punta Arabí is both the biggest and the oldest, with hundreds of sellers gathering just off the main road that runs through Es Caná. Taking place on Wednesdays from April to October, it opens at 10am and early arrival is a must if visitors want to enjoy a full run at the space. Las Dalias is perhaps the most famous, located on the main road through San Carlos. It’s much smaller but hosts live music as well as the famous Acid Sundays parties. Sant Joan is somewhere between the two in size. Open all year round, it presents the same hippie wares alongside more local culture, as well as art galleries in one of the island’s most traditional settings.

“There’s still something empowering, magical and mystical about dozens of people drumming,” says Andrew Shovell, former percussionist for M People and a big part of the Defected Records family who played drums on Benirrás through the ’90s and ’00s. “Ibiza is an island of love, healing and music. The drumming is just about freedom, getting in touch with the most ancient rhythms of ourselves in our modern times.

“Ibiza has always been a haven for people seeking freedom,” Shovell continues. “Over centuries it’s had a pull for rebellious folk. More leftfield-minded, freedom-seeking, love-hungry, musical feasting tribes from around the globe are attracted to this really small island. But why? There’s something special about Ibiza. People say it has a magic, and it certainly does. Everything calls to you to slow down, stop and get into a different rhythm.”

Ibiza has a rich history related to spirituality. The early Phoenicians believed the island to be blessed by Gods due to its rich red earth and the lack of prey that can harm humans. Later, the Carthaginian god Bes — thought to be the enemy of all that is bad and symbolise the good things in life (music, dance and sexual pleasure) — gave the island its name, while their goddess Tanit has always been closely connected to the island, representing love, life and fertility. Even Nostradamus, the 15th Century physician, astrologist and author, predicted that “Ibiza will be Earth’s final refuge”, while the island’s local Ibicencos are so renowned for their tolerance there is a phrase coined for it: ‘Tolerancia Ibicenca’.

Sometimes it can seem there are almost as many therapists in Ibiza as there are ravers, and one of the most popular forms on the island is craniosacral therapy — a form of osteopathy developed in the late 18th Century that uses gentle massage of the skull and fascia to alleviate headaches, stress and tension. There are a number of places that practice craniosacral therapy in Ibiza, usually as part of retreats practicing yoga and reiki.

Drumming circles have been going at Benirrás since some time in the ’60s — nobody questioned for this article seems entirely clear of an exact start-date — while the popularity of the Benirrás drumming circle surged after what became known as The Day Of The Drums on Sunday 18th August 1991, where hundreds of people protested the first Gulf War in Iraq. It became an annual event representing the peaceful nature of the island that was eventually banned by local officials due to its immense popularity, as the local area couldn’t support the influx of people. But the tradition stuck for a smaller gathering each Sunday through the summer months, though somebody is usually found playing there in some form right through the year.

Shovell says he thinks the draw of Benirrás’ hypnotic drumming session is connected to something primal. “It’s so ancient that there’s something in every single one of us that taps into the ancestral, ancient, basic human qualities,” he enthuses. “People might not know why they like it, but they like it! Even if you've never picked up a drum, there’s something in our bodies, in our hearts, in the rhythm of our existence. We’re not in our cars. We’re not on trains, going to work or on our iPhone. Hearing drums, seeing people play drums for hours: it takes us back to our primal selves — and that’s why it's magnetic.”

Raul Eiriz is one of the founding members of the band Beni Drums who, although now defunct, originated from the Benirrás drumming community and went on to play all over the island. “For some people we represent the happy Ibiza spirit,” he explains, as the sound of a didgeridoo resonates behind him at Ibiza’s Punta Arabí hippie market (see box-out above). As the only Spanish member of Beni Drums he says the group that continue drumming today remain a mix of races, backgrounds, religions and sects.

Going to Ibiza for a health retreat may feel like a contradiction in terms for many Ibiza regulars, but for every superclub on the island there are countless retreats offering wellness holidays and activities. From the Vital Energy Retreat, to Dance retreats, fasting yoga, holistic healing, meditation retreats, deep sleep weeks and even FloatFit — a form of yoga done floating on a surfboard — the island has an almost infinite supply of ways to find a renewed state of zen.

The drive to Benirrás is simply stunning, dropping from the hills towards sea level, through the forest, round alpine bends. But the Sunday drumming ritual has become so popular in recent years that the road to Benirrás closes in early afternoon through peak season. The best advice is to arrive early in the day and spend a few hours wandering the small market where hippies hawk wares. The beach, which is naturally stone, has now been covered in sand and developed through the years, with a small collection of restaurants and bars surrounding the entrance to the bay (most places don’t accept a card though, so go with cash if you do intend to spend the day). If you can’t get there until later, numerous car parks have opened around the area that run shuttle buses to Benirrás for a nominal fee, there’s also an aquabus that runs from San Antonio, San Miguel or Portinatx.

“Through the summer, every single day there is a constant beat and thousands of people dancing to a rhythm on the island, seven days a week, at pretty much every moment for seven months,” Shovell continues. “That has to have a mystical, magical, energetic and rhythmic influence which taps into what’s gone on before and produces what’s going to come. Ibiza is a mother if you use it right,” he concludes. “It heals you, it holds you, it loves you. It gives you time to learn what you need to.”