Solid Gold: DJ Shadow's 'Entroducing....' is a masterclass in the art of sampling | DJMag.com Skip to main content

Solid Gold: DJ Shadow's 'Entroducing....' is a masterclass in the art of sampling

Mo’Wax was undoubtedly one of the most important British record labels of the 1990s, showcasing a kind of retro futuristic approach to art, where aesthetic vision seemed to matter just as much as musical genre. It is a label whose spectacular rise and demise merited its own film, an honour it eventually received with the release of The Man From Mo’Wax, a 2016 documentary that took a searingly honest look at the life of Mo’Wax founder James Lavelle.

If you want an alternative approach to the Mo’Wax story and the avant beat scene that the label fostered, however, the easiest way is to listen to two Mo’Wax records, born just two years apart, which showcase the label at its very best and utter worst. DJ Shadow, a nerdish record collector turned DJ/producer from California — real name Joshua Paul Davis — was involved with both: ‘Psyence Fiction’, the debut studio album from UNKLE, the trip hop supergroup (shudder) put together by Lavelle, is the label at its bloated nadir, an overextended mish mash of fashionable ideas and ill-fitting guests that rode a wave of hype into the British top five in August 1998.

‘Endtroducing.....’, the debut album by Shadow himself, shows Mo’Wax at its cultural apex, an hour-long blitz of inspired beats, wonky samples and cinematic ambience that seemed, for a few months in 1996, to make a convincing argument for abstract instrumental hip hop as a worthy partner to proper hip hop, rather than a B-side-relegation or after thought.

The two records are alike in many ways, courtesy of Shadow’s towering beats and atmospheric nous. And yet, when it comes down to fundamentals, the pair couldn’t have been more different. ‘Psyence Fiction’, produced by Shadow with Lavelle on ideas, is the all-star continuation of ‘Endtroducing.....’, its glamorous, over-operated twin; an album that took the ‘Endtroducing.....’ blueprint, painted it in lipstick and sat an expensively deconstructed jazz bonnet on its head. ‘Psyence Fiction’ feels oddly needy, like an overeager school kid who can’t wait to tell you all about his new friends: guest spots from the likes of Thom Yorke and Richard Ashcroft were the much-vaunted selling point of ‘Psyence Fiction’, the brightly shining melodic lights that Shadow’s beats served to support.

‘Endtroducing.....’, by contrast, exists entirely in its own world, self created and hermetically sealed from reality. ‘Inhuman’ is often used to mean “cruel” or “barbaric”, lacking in passion; but ‘Endtroducing.....’ is inhuman in a different way, like an album put together by the sheer power of thought. When (sampled) voices do arrive on ‘Endtroducing.....’ — the count offs on ‘The Number Song’, say — the meaning of the words rarely seems to matter, with language serving more as verbal percussion, another layer to Shadow’s immaculate musical mash.

‘Endtroducing.....’ proved that you don’t need special guests, MCs or singers to create a universe that is perfectly balanced. Guinness World Records would in 2013 proclaim it the first album created entirely from samples, which may or may not be true. But ‘Endtroducing.....’ is undoubtedly a masterclass in the art of sampling, created with just an Akai MPC60 sampler, a Technics SL-1200 turntable, an Alesis ADAT tape recorder and a mountains of records, which Shadow had assembled over years of obsessive music buying. ‘Endtroducing.....’ feels like the apotheosis of digger music, music forged in dusty warehouses and family clear outs, music that stunk of warped vinyl and dog-eared sleeves.

A lot of people hate ‘Endtroducing.....’ for sucking the vocal lifeblood that is the MC out of hip hop. And they hate Shadow for the misguided reviews that acclaimed him as the saviour of hip hop, someone who would bring “depth” to a genre that was, quite frankly, doing very well on its own before Shadow came along. Shadow didn’t help himself by including a brief track on ‘Endtroducing.....’ called ‘Why Hip-Hop Sucks in 96’. But those reviews weren’t the artist’s fault and they arguably misunderstood ‘Endtroducing.....’, a record that may have worked in the hip hop idiom, using the sampled language of rap — particularly the boom bap productions of the mid 90s — but which wasn’t an attempt to replace hip hop or do away with the MC.

No, ‘Endtroducing.....’ is something far stranger, a deep dive into Shadow’s grainy world of records, where death metal blast beats collide with mournful pianos (‘Stem/Long Stem’), Metallica samples become dance-floor dynamite (‘The Number Song’) and Björk emerges shell shocked and muddied from the sonic soup (‘Mutual Slump’, which samples Björk’s ‘Possibly Maybe’). That Shadow became a star in the UK on the back of the record is bizarrely incongruous: ‘Endtroducing.....’ is very much an album where the music itself — or better, perhaps, the records themselves — are the star.

That’s not to say that Shadow doesn’t impress on ‘Endtroducing.....’ — his production is immaculate throughout, from the beat juggling on ‘Building Steam With a Grain of Salt’ to the odd time signature game on ‘Changeling’. But you come to the record knowing that Shadow didn’t play a single note on it, with the question on many listeners' lips being “Where did he find that?” rather than “How did he play it?”. In this, ‘Endtroducing.....’ may be the archetype DJ’s album, a work of collection, curation and taste.

The other strong argument that ‘Endtroducing.....’ isn’t exactly a hip hop album comes from the fact that you can’t really rap to it — easily at least. There’s too much going on, for a start, with beats collapsing and reforming, sampled voices drifting in and out of attention and scratches needling at the mix. Much instrumental hip hop seems to be crying out for an MC to dot the record’s “i”s (at best) and fill the vast screaming void at its heart (at worst); ‘Endtroducing.....’ feels entirely complete, in and of itself. How, for example, would anyone rap over the droning sonic assault on ‘The Number Song’? There’s no space to slip in a cigarette paper among the beats.

What’s more, ‘Endtroducing.....’ very much has its own emotions, which an errant MC might upset. Listening back to ‘Endtroducing.....’ after a few years away, it’s apparent what an incredibly sad record it is at times, from the glazed choral effects and rain-pattering piano on ‘Building Steam With a Grain of Salt’, to the moody new age chords on ‘Changeling’ — a song that reminds me of Manuel Göttsching’s ambient tearjerker ‘E-2 E-4’. Davis has talked about how he often felt depressed during the recording of ‘Endtroducing.....’ in interviews, and you can feel this seep into the album, the emotions all his, even if the sounds are borrowed.

But ‘Endtroducing.....’ isn’t just sad:  ‘Stem/Long Stem’ is furious in its trashy assault, while the wonderful organ/drum face off ‘Organ Donor’ hits a note somewhere between chirp and chagrin. ‘What Does Your Soul Look Like (Part 1 — Blue Sky Revisit)’, meanwhile, ends the album on a serene, rather contented note, as if Shadow has worked through his problems and can now look forward to blue skies and sun loungers. “I just think that ultimately, when I listened to ‘Endtroducing.....’ ... I think I wanted to contribute so profoundly,” Shadow told Zane Lowe in September 2021. “And I knew that the only way I could do that was to be me. Hell or high water, good or bad.” 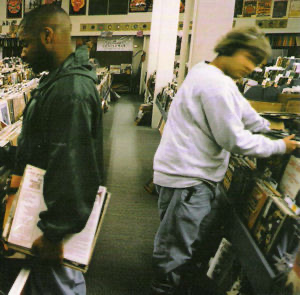 In the UK ‘Endtroducing.....’ was everywhere in late 1996, from clothes shops to after parties, TV makeover shows to jazz beard gatherings. It might have seemed logical, then, to reprise its sound on ‘Psyence Fiction’, the album that was intended to make stars of Mo’Wax and Lavelle himself. In this, ‘Psyence Fiction’ arguably achieved its goal. But even at the time the UNKLE album felt like a vast cinematic climbdown from the heights of ‘Endtroducing.....’, coming across like the three Star Wars films that George Lucas produced in the late 90s/early 2000s: not bad, in theory, and coming from the right place, but nowhere near a worthy successor to the original lightning bolt of inspiration.

Mo’Wax would collapse soon after, while Shadow hotfooted it to a major label. And if he never again scaled the artistic heights of ‘Endtroducing.....’, he produced a steady stream of interesting records, which dared to break out of the vision he had so brilliantly established on his debut, none the more so than 2006’s ‘The Outsiders’ in which he embraced the moddish, hyper-local sound of hyphy. ‘Endtroducing.....’ itself was reissued in 2005 as a deluxe edition, again in 2016 for its 20th anniversary, and hit the shelves once more in September 2021 to mark its 25th birthday.

In 2021, instrumental hip hop sits in the unlikely position as one of the world’s most popular musical genres, thanks to the dubious charms of study- and sleep- friendly lo-fi hip hop. On a superficial level, DJ Shadow could — and perhaps should — be known as one of the pioneers of the genre. That he never is will probably come as a relief to Shadow, a man for whom “background music” is a snivelling contradiction in terms. ‘Endtroducing.....’ was both an introduction to the singular talents of DJ Shadow and — in its own way — an end, a towering monument to a perfectly weighted sonic vision to which Shadow would never quite return.