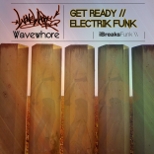 admin
Facebook Twitter WhatsApp
The thing with the body politik of the latest US dance explosion is that you have to let the Yanks believe that they're leading the way, not trailing 15 years behind the UK and much of Europe. So long as this illusion is maintained, everybody's happy. 'Get Ready' is more like 'mince-step' acid disco breaks on West Records from 2005, while 'Electrik Funk' is like a hip-hop inclined acidic roller that could've appeared on Tayo's Mob Records in 2004. But let's just say it sounds fresh and brand new, eh?
6.0

Lost In You feat Lena Cullen

Dread At The Controls (Remixes)

Back To The Future

Bounce To This feat Alaska MC

Welcome To The Universe (Remixed)