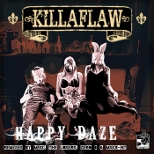 admin
Facebook Twitter WhatsApp
After a triumphant live set at Breakspoll, these Liverpool lads appear unstoppable this year. The original has loads of grungey guitar FX and a great bluesy vocal from singer Benn Helm, extolling the virtues of "getting high 'til the morning comes", and generally offering an uplifting vibe to counter this age of austerity. These guys are gonna go far, and the remixes are pretty on-point too. Zero B expands the original into an indie-dance breakbeat scene-traverser, while Mskr-nt's cheekily gets its dubstep wobble on. Losers turn it synthy electro-punk, while Misk makes it a bleepy, bassy electro thang. Tops.
9.0