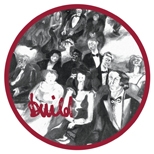 admin
Facebook Twitter WhatsApp
Baobinga's Build label has been on fire over the recent months, as documented in this column. His productions, especially the album with I.D, have been equally impressive. On this collaborative release, he teams up with Bristolian Ginz on one side and Romanian producer Cosmin TRG on the other. 'Good Skank' featuring Ginz is thoroughly tripped-out, awash with purple synths and half time slopped snares. It's great, but the garage-influenced flip of 'I Get Ruff' cuts the mustard a little finer with its swirling arpeggios and messed-up basslines.
8.0

Looking For The Deep Bass

Rain feat Yolanda/War Of The Worlds

Momma's Boy Vs Mikix The Cat