Raise It Up EP | DJMag.com Skip to main content 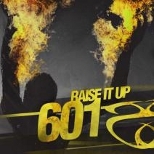 admin
Facebook Twitter WhatsApp
Bit late on this, but these guys deserve props for such devotion to the scene and a succession of kick-ass tracks. Lately they've been on a jungle breaks tip, and the title track here foregrounds Omni Trio breakbeats and a Zinc-ish bass alongside a Raise it up Rasta vox. The bass wobble after the drop is FIRE, while 'Lion Dub' moves from being a dubby skanker into ravey junglist heaven. A Boymerang bassline, an All the junglists shout-out and a dubwise sensibility drive it home. An unhinged 'Rage', meanwhile, sounds like it would've fitted right in at Fab & Groove's legendary jungle night. Immense.
9.0

Around The Block feat Alaska MC

Must B The Music (Dancefloor Outlaws Remix)

Too Much For You