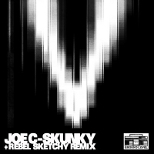 admin
Facebook Twitter WhatsApp
This disco-funk breakbeat opus by the Dallas, Texas-based Joe C is well produced and will serve well for warm-ups, but there was a ton of this kinda stuff released in the mid-noughties on labels like Splank! and West. Most of this would've passed America by, so it's a valid release, but isn't really doing anything new. The Rebel Sketchy remix transports it into the new decade by keeping some of the funk stylings but adding a rasping linear bass, technoid squelches and chopped up breaks for more of an electro-funk peak-time effort.
6.5