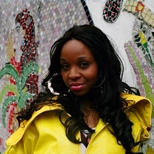 admin
Facebook Twitter WhatsApp
Suncycle member Lady Chann has been making some big waves recently. It's only fitting, after collaborating on other tracks, that she should top bill her own solo release. Released through Toddla T's new Girls Music label, it's a great fit. 'Sticky Situation' and 'Eye Two Fast', both produced by garage don Sticky, are true dancehall bombs. If that isn't enough, Toddla T and Seiji clinch the deal on the 'Sticky Situation' remix which is absolutely skanky-skanky!
8.0

Time To Blow Your Mind

Back To The Old Jack