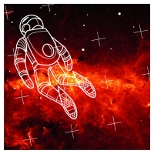 admin
Facebook Twitter WhatsApp
Bolstered with a load of crossover potential, this latest transmission by 'milky-disco' evangelists, Lo Recordings, summons some of that cold wave/electro-pop charm similar to that of Hurts. After initially bending ears with a release on Traum Records, Freska has found his way over to Lo HQ with this generously-sized EP of spiky disco-pop, mutant disco and cascading electronica. Remixes come from a variety of obscure producers, but they all add a magical touch to this budding pop hit.
7.5

It's A Bubble Remixes