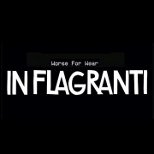 admin
Facebook Twitter WhatsApp
Sleazy house music from In Flagranti with warped vocals sounding like Sleazy D and a killer, unforgettable bassline. This EP is a taster from their forthcoming album (of the same name). Accompanied with remixes from Punks Jump Up, who weigh in with a fidgeting, day-glo remix charged with boisterous bass and raucous effects, and an industrial-strength disco version by Mixhell, which sounds like an old Wax Trax/Al Jourgensen-penned dance tune from the late '80s.
7.5

Why You Come Back Here EP