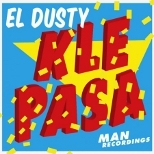 admin
Facebook Twitter WhatsApp
A squelchy Rio-ish festival flavoured outing which was mixed and mastered in Berlin by Jan Driver. There's a hint of an "I Was Drunk" novelty angle, but what it really sounds like is the kind of pure fun track Fatboy Slim would have knocked up under one of his many pseudonyms back in the day. Although it apparently actually originates from Corpus Christi on the Mexican Gulf coast rather than the south coast of England.
6.0

Let The Beat Control Your Body

Out For More / I Need You