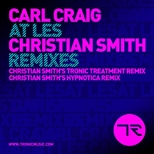 admin
Facebook Twitter WhatsApp
In which Carl Craig's off-kilter, ambient techno classic gets a thorough shake down by Christian Smith for his own Tronic label. Now, those ready to light torches and assemble the customary angry purist mob might be advised that C2 himself approves wholeheartedly, and frankly who wouldn't when the results sound like this. The Hypnotica Remix is subtle, yet firm, while the Tronic Treatment mix somehow elevates the track's already-epic status to something bordering transcendent. Quite a feat.
8.0

Best I Can Do