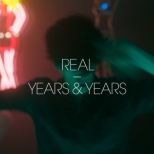 admin
Facebook Twitter WhatsApp
When I used to see the Kitsuné mark on a release it was a reason to check it out with a high level of anticipation, but for quite a while now their output seems to have lost focus. "Real" sounds like some bad Brit-school attempt at the kind of pop-dance crossover drivel that takes up the majority of Radio One airtime. Part Coldplay, part 'the Voice', it isn't one to be remembered as a landmark release for the label.
3.0