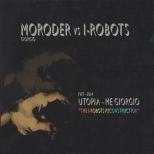 admin
Facebook Twitter WhatsApp
Giorgio Moroder had quite a year, with the Daft Punk link up and finally finding himself behind some DJ decks in his Seventies. Here's something from THE Seventies, worked up by Opilec Music boss I-Robots. The track was originally included in a partially mixed album in 1977 and here are newly extended versions. '1977 Reconstruction' is simply the original extended to almost 7 minutes, '2014 Tape Reconstruction' brings things up to date with beefier production.
7.0