All Because the Lady Loves | DJMag.com Skip to main content 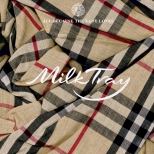 admin
Facebook Twitter WhatsApp
‘Hotel’ might already be an anthem in some circles but if you listen just right, there’s an actual glory to the formula of DJ Milktray’s music contained on his debut EP for Astral Black. Hard, heavy kicks hit primed on the first bar whilst the follow-up comes loaded with melody, creating himself space and a tangible contrast. Thankfully, the R. Kelly cut-up isn’t the lad's only trick, though ‘Lilbit’ does somewhat mimic ‘Hotel’s pattern.
7.5

'The Serpent and The Rainbow'

'Spooky Action From A Distance'