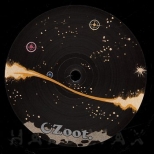 admin
Facebook Twitter WhatsApp
As far as I’m concerned the attention shy Maghreban is three for three. He’s put out three records on Zoot and each one’s done something for me. This third one’s devoted to Star Trek and the Vulcan mating ritual, which he describes as "often brutal" — a phrase that is probably the optimum tag line for the A-side, ‘Amok Time', which totes the kind of churning low-end that would’ve sweetened up Plastic’s 2009-era soundsystem just perfect.
8.0

A Pair of Quiet and Empty Rooms