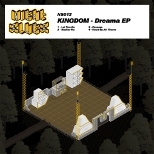 admin
Facebook Twitter WhatsApp
If I were Kingdom, I'd probably be a bit pissed off. After building a decent part of his musical persona around coming at international club music from an unashamed hip-hop and R&B angle, with a track like last year's 'Bust Broke' dropping from subterranean funky to a full-on ballad, he's since been ripped off more than most. And 'Dreama'Â does sound a bit pissed off: it's heavy, unforgiving, and nowhere near as immediate as his past work, with irregular rhythms and tracks that refuse to sit still. 'Let You No' is a decent summation of the whole EP, with whirling synth melodies circling lopsided 808s, before the entire track falls apart into a minimal re-edit of Sadie Ama's 'Fallin''. It also sounds pretty triumphant - 'Dreama'Â is the sound of Kingdom taking his already unpredictable sound deeper into the abyss, and freer from convention than it's ever felt before, both stylistically and rhythmically.
8.0