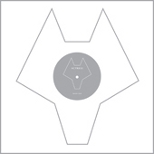 admin
Facebook Twitter WhatsApp
There's been a lot of talk about "fucked techno" lately (granted, mostly on Boomkat), with people from the US underground's noise and DIY scenes reinterpreting techno in a similar fashion to how the 100% Silk lot do house. Personally, I'm pretty sceptical: some of it's good, but there doesn't seem to be much of a filter on it, and when you listen to Actress, you realise that they're not that weird anyway. 'Rainy Dub' is a loping, off-beat bass loop with tape delay slowly flooding the blank space, and could easily be billed as a sequel to last year's 'Maze', while 'Faceless' is like Chinese water torture in a Drexciyian sewer. Now that's fucked.
7.5