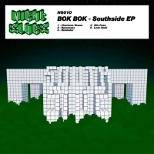 admin
Facebook Twitter WhatsApp
As this "scene", or non-genre, or whatever it is that this reviews page covers grows, there's more and more unremarkable releases being made within it. You know the type, they use the same woozy synths as everyone else, the same 808 samples or garage breaks as everyone else, and they nearly all sample Aaliyah at some point. Bok Bok's Night Slugs label has been copied more than most of late, and Southside, his first full release for the label, plays out like a big "fuck you" to those who thought they could pin Night Slugs down. It's hard, uncompromising, individual music with classic grime and Chicago at its heart (and, crucially, in its basslines), painted with the sort of widescreen artistry that the Night Slugs artwork, also by Bok Bok, reflects. Watch how many people try to rip this off in the next six months.
9.5

Love Without A Heart