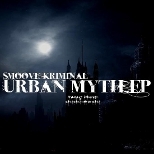 admin
Facebook Twitter WhatsApp
London's Smoove Kriminal has been releasing UK house for a while, and has a real way with production standards and melodies - the problem is, sometimes there's a lack of invention and variation that lets his tracks down. 'Urban Myth' though, seeks to remedy that, touching on grime, dubstep and R&B, but the eski synths and vocal samples never feel clichÃ©d, and the half-step drums never weigh these tracks down. It's not necessarily spectacular, but it's a really strong record, and his best work yet.
8.0