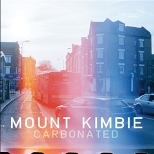 admin
Facebook Twitter WhatsApp
The third release off the 'Crooks and Lovers' album from the MK boys, and once again, the interest lies in the extra tracks and remix package. 'Flux' and 'Bave Chords' further propagate MK's oxidised vibrations, the latter track offering a fine augmented lushness. New on the decaycore set is Klaus, with a portentous remix of 'Adriatic'. Airhead and Peter Van Hoesen both remix 'Carbonated', with the former wandering nicely outside the circle.
7.0

'Not In My Disco'