Eyes On You (Remix) | DJMag.com Skip to main content 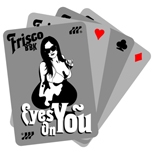 admin
Facebook Twitter WhatsApp
North London veteran Frisco is joined by Boy Better Know CEO and independent chart topper Skepta and Ruff Squad's Rapid on a more palatable grime version of a commercial attempt. Rapid brings back his 2005 style production, thank God, hopefully for not the last time, and they all rally with OK bars. Taken from his forthcoming album 'Fully Grown' which is out later in the year. We all know Boy Better Know can do so much better than this!
8.0

Look Into My Eyes