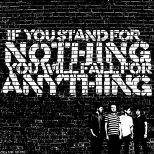 admin
Facebook Twitter WhatsApp
It's safe to say that the Enter Shikari chaps aren't a bunch of bandwagoning dubstephiles who think that Doctor P is a demi-God (well, I bloody well hope not), nay, they have been propagating their mongrel rock-step for some time. The title track is rather fun, and will get many an indie oik going apeshit. 'Destabilise' gets three remixes, with Rout producing a floaty dubstep de jour remix, but I really love Jonny & The Snipers version, which pleasingly has no "step" at all.
6.0

'Not In My Disco'