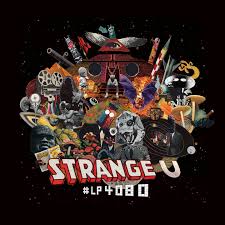 Neil Kulkarni
Facebook Twitter WhatsApp
If Strange U released a single every month I'd make it single of the month. The first track off my UK album of the year thus far — I say 'thus far' but to be honest I can't see anything topping 'LP#4080', such a stunning suite of unhinged magic it is. What's crucial to what makes 'Terminator Funk' so compelling is that though Strange U are clearly touched by the old. They only zero in on vintage ODDNESS, the lopsided beats and unearthly ancient-futurist noise that made things like 'Come Clean' such earthquakes in hip-hop consciousness. King Kash has never sounded as unmanneredly awesome as he does here — vocal seemingly slurred/slowed until it hums with Zygote's incredible lo-end tectonics. Absolutely essential and if you haven't got the album yet consider your 2017 utterly bereft.
10

I Can't Wait/Don't Say A Word

'The Moment I Feared'

'High As A Motherfucker'