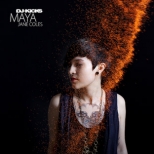 admin
Facebook Twitter WhatsApp
It's been over three years since Maya Jane Cole's last outing on Anja Schneider & Ralf Kollmann's venerable Mobilee. Since then, it's fair to say things have "gone totally mental" for the producer. But now the dust has settled on her debut set for I/AM/ME, it would appear she's back in the game for producing sturdy, heads-down club music. 'From the Dark' bristles and shuffles skilfully, but it's 'I Would Fly' which wins out here, a frisky, hypnotic loop which burrows itself into the mind.
8.0

We Got the Box