You Bring Me Joy | DJMag.com Skip to main content 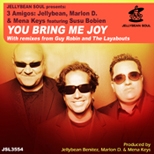 admin
Facebook Twitter WhatsApp
It's easy to be apprehensive about diva-featured records given the degree of misuse they've suffered in the hands of unskilled producers over the years. ?Have no concerns here, however. 3 Amigos may be a truly terrible artist name, and 'You Bring Me Joy' an almost equally bad title, but Jellybean, Marlon D and George Mena are no mugs once in the studio, and they build SuSu the soundstage she deserves. The trio power through a nicely balanced 'Club Mix' that's all about getting a groove on and letting SuSu do her thing, while the UK's Layabouts turn out a mix that's aimed in the same direction, but busier with the keys. Guy Robin's retro-inclined mixes might be good, or not so good, depending on how you felt about Robin S basslines or, indeed, if you can imagine it less as Robin S, and more MAW circa 'Voices In My Mind' and 'The Nervous Track'.
8.0

One Night In Tokyo