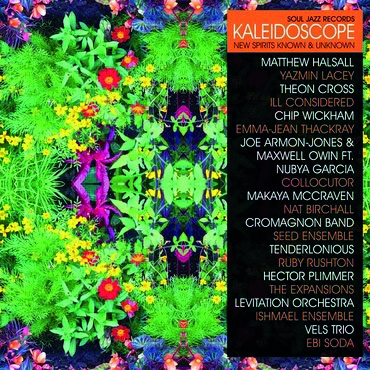 Ben Murphy
Facebook Twitter WhatsApp
This collection of new UK jazz from a long-running champion of the form is very welcome. Coming after the similarly inclined ‘We Out Here’ compilation on Gilles Peterson’s Brownswood, ‘Kaleidoscope’ shows the breadth of the current British scene, and how its modern iteration intersects with electronic music. Matthew Halsall & The Gondwana Orchestra’s Coltrane-esque, modal waltz style on ‘When The World Was One’ is a highlight, while the haunting atmosphere of Ishmael Ensemble’s ‘Kito’s Theme’ has drums that feel equally influenced by broken beat and hip-hop. Pokus’ ‘Pokus One’ has beats that roll and slip between temporal zones and eerie synth smears amid its undulating bassline, sounding like a dream 4hero and Photek collaboration, and Yazmin Lacey’s vocal on ’90 Degrees’ taps into the same warm jazz-funk feel of Erykah Badu’s ‘Mama’s Gun’. BEN MURPHY
7.0
back to top
DJMAG
all sections