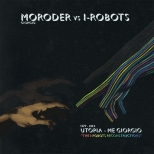 admin
Facebook Twitter WhatsApp
A very sympathetic re-edit from I-Robots who extracts ‘Utopia’ from the ‘From Here To Eternity’ LP courtesy of the legend that is Giorgio Moroder. In its original format it clocks in at a brisk three-and-a-half mins, but like so many of these gems was crying out to be extended and re-introduced to a new audience of disco-hungry middle-aged men with ‘fashion’ beards. And so the deed has been done with the new version nipped, tucked and extended to seven minutes of proto choral techno joy. Investigate and party like it's 1977.
8.0

'Five O'Clock in the Morning'

What Do You Know

'You're Not the Only One I Know'

Where The River Don’t Flow