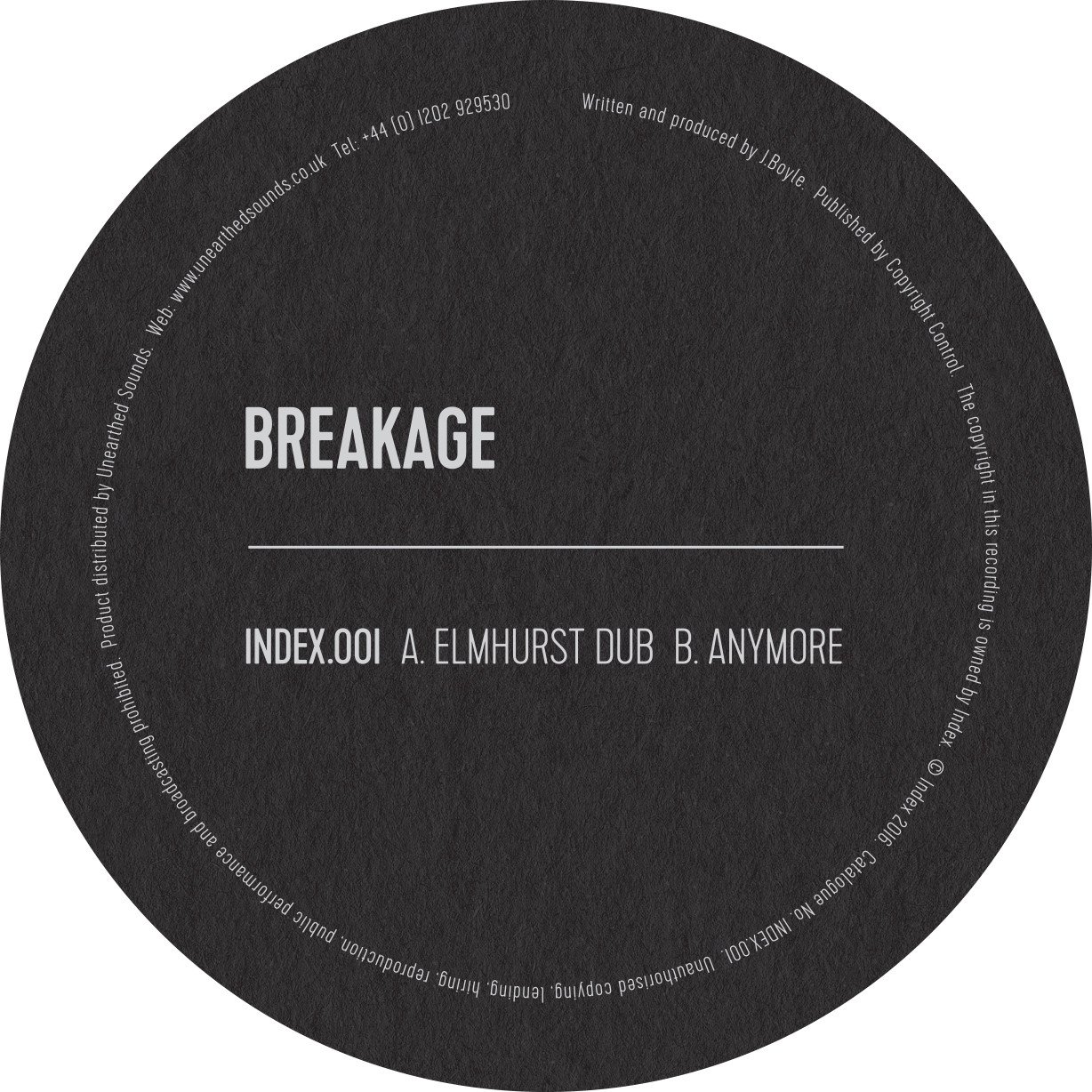 9.0
Facebook Twitter Google+
It's the first one from Breakages new label Index, so it’s bound to be a biggie right? Right? The intro relives a classic set of breaks before a ragga vocal add the throwback vibe. What makes this track really special, however, is the bassline! It will tear the wall of any club down, it’s devastatingly good! If you like things dark and dirty, you’re going to want to hear this, and by the way, the B-side's amazing too!

8.5
Facebook Twitter Google+
The second chapter of Lenzman’s new label journey brings us to ‘Earth Tones’ an EP with a mammoth eight tracks plus an additional two instrumentals. Distinct in style, ‘Bayview’ oozes the effortless swag that enriches all this man touches. Slight melancholy chords dance lightly on a bed-soft rolling drums, while the snippets of soulful vocal add even more emotion. The sub is melodic and warm, and brings the track through to its uplifting finale.

8.0
Facebook Twitter Google+
We’ve seen the name cropping up at the Dispatch camp before on a colab single and then on the #100 release, but now we hear his debut EP as a solo artist for the imprint. It’s a soft and warm, slightly blurry drop of liquid, with subtle twists and hint to a darker undertone. Not usually the type of track you might associate with the label, but a refreshing burst which lift the the rest of the techy, gritty release.

8.0
Facebook Twitter Google+
If there’s one thing we like better than a dark and distorted bassline, it’s a dark and distorted bassline adorned with a masterfully juxtaposed, stunningly dainty little vocal. Like warm pie and ice cream the opposites create an amazing sensation. Beneath the classic drum pattern there’s an eerie, haunting, atmospheric vibe but thanks to the uplifting chording and touches of light piano, the track in its entirety is beautifully balanced. All this from the first track on a debut EP? Exciting times!

8.0
Facebook Twitter Google+
This is a track from a new artist who is apparently still working on his mixdowns. If this is the vibe Raid can create while he's still cutting he's teeth we are excited to hear what his future holds. This is understated dancefloor, nothing is too much, each element is balanced perfectly. A gently wobbling bassline, with cool tropical touches and occasional squelches of dirtiness, for us though, what makes this track is the vocal.

8.0
Facebook Twitter Google+
In recent years, Turno’s supporter base has grown massively, and while his roots remain firmly in jump-up's solid ground, he is now gaining much acclaim and respect from different areas of the scene largely down to the high craftsmanship and eclectic variety of his output. 'Invaders' is out and dancefloor driven, with lots of layers of big, brash twisting bass and cheesy old film samples, we’ve got eerie atmospherics and elements usually attributed to tech. Big!

7.0
Facebook Twitter Google+
'Jack Thumb' is a glorious collision of rolling, gritty tech and smooth chord-driven liquid, and a strong release from a relatively new label. It would be great to hear an instrumental of this one, or a remix with less vocal, while there’s no doubting that Auro Janks has an absolutely beautiful voice, there was just too much vocal on this track. Looking forward to hearing the future of everyone involved on this one.

7.5
Facebook Twitter Google+
These guy always come with the fun, it's their light hearted take to drum and bass which always makes us thoroughly enjoy D&amp;C productions. This track of course starts with and continues to be laced with their signature bubblegum vibe, which lends itself nicely to the land of commercialism, however for us this release has really cranked the trio up to the next level, the overall feel is heavier, with a nod to the twisted, techy depths of neuro. Great vocal as always.

8.0
Facebook Twitter Google+
Dark modern jungle that will tear down the dance instantly. Loud, aggressive and full of attitude, a relentless and ongoing bassline will barely leave you time to breath while you pour over the nods to the past.

9.5
Facebook Twitter Google+
A release on Neosignal brings a harder more ferocious Emperor then we’ve grown accustom to, and we love it! ‘Shadow’ is a pounding, swathing call to arms, there are distinct sections to this track, each with there own vibe, a calming, meditative intersection separates and giving breathing space between the next onslaught of brutality. The relentless throbbing at the end of the track is devastatingly good, and we’re left desperate for more. Amazing EP!

8.5
Facebook Twitter Google+
If you’re a fan of Dead Mans Chest this isn’t an EP to be missed, the releases contains six brand new tracks but also comes with a mixtape cassette including all the EP’s released so far on ingredients. ‘Tears’ is an amazingly nostalgic trip, with super sharp worthy bass and a collection of jungle breaks, the vocal is reminiscent of 90’s R’n’B queens and the samples of Fantazia mixtapes bring the back all the memories you could hope for.

9.0
Facebook Twitter Google+
Very soon Black Sun Empire will be unveiling there new album, but first we welcome this beast of a track featuring Nosia. It’s as intense as expected, with an incredibly cinematic atmosphere, it feels as if you’re being immersed into a the roll of protagonist in a dystopian, sci-fi thriller. Layers and layers of energetic sound with a barrage of sudden twists and distortions, powerful, organic sounding drums and a creepy spoken sample.

9.0
Facebook Twitter Google+
This is dark. This is disgustingly dark. This is the kind of disgustingly dark track that makes you screw up your face into unfathomable shapes and throw you shoes into the DJ booth. The pattern is simple and repetitive, it's pounding to the point of feeling like a physical presence is captivating you, forcing you to contort in the dancefloor. Full of glitches and sci-fi nods and switch ups, keeping the track engaging throughout.

7.5
Facebook Twitter Google+
Submorphics himself describes this EP as “four slices of synthetic soul”, we don’t think we could have found a more perfect description. Melodic, warm liquid drum and bass has a way of soul searching, cleansing your spirit and refreshing you entirely, this track uses classic amens, light floating synths and an emotional vocal to work it’s magic. It’s a release which fits the Shogun shaped whole exactly and will sound even better in the sunshine.
admin
Facebook Twitter WhatsApp

7.0
Facebook Twitter Google+
A well-blended mix between hip-hop and drum &amp; bass, with jungly breaks, neuro features and sci-fi patterns. It’s dark and dystopian and sounds like the soundtrack to a comic book film remake.

8.0
Facebook Twitter Google+
The level of depth in this track is unreal, it’s been crafted to such a high calibre it feels like a physical presence warping its way around you. It’s a moody, tech-stepper full of dark distortion and a serious amount of pent-up energy.

8.5
Facebook Twitter Google+
Woah! This is grimey. It’s got a simplified rawness about it, lots of empty space and an amazing variety of influence from across the UK bass music scene, full of familiar samples, and a reworked jungle-beat pattern.

8.0
Facebook Twitter Google+
This is a warming roller from the duo, fearturing the vocal talents of Charlotte Haining (who if you hadn’t noticed is absolutely everywhere right now). Soft pads, uplifting chords and subtle shimmers all pulled together expertly.

8.0
Facebook Twitter Google+
Dark modern jungle that will tear down the dance instantly. Loud, aggressive and full of attitude, a relentless and ongoing bassline will barely leave you time to breath while you pour over the nods to the past.

'I Need The Night'

8.0
Facebook Twitter Google+
Existing effortlessly between the authentic and the commercial Loadstar exquisitely execute uplifting cords and a dark and brooding undertone, creating perfect balance. We a really felling the vocal of this one too.

1. FD 'This Is Now' The North Quarter "For a while now think FD has undeservedly been flying under a lot of people's radar. I'm really happy to have signed this one for my label. Real soul vibes." 2. Ulterior Motive 'Hey Judas' Dub "This one has 'anthem' written all over it. It combines Ulterior Motive's signature tech-funk, urgent DRS vocals and a pinch of late '90s Renegade Hardware influences to devastating effect." 3. Redeyes 'In My Life' The North Quarter "Another criminally underrated producer who has been keeping the soul alive in the scene. He's currently working on an EP for me and this one is a beauty." 4. Signal & Hyroglifics 'Make Me Feel' Critical Music "Tech and soul meet here in this roller by Signal &amp; Hyroglifics. This one has a really 'ill' vibe to it, in the best possible way." 5. Jubei 'Cold Heart' Dub "Every set needs a Jubei roller in it, and this is one of the highest calibre, it just flows and flows." 6. Submorphics 'Don't Be So Cold' The North Quarter "I've been playing this track for a long time and I still love it. Extremely happy I managed to get it for the label." 7. McLeod & Sympton 'Cherry Hill' Innerground "Marky just hooked me up with this one. It really grabbed with me the clean, crispy breaks and the room-filling bassline. It then adds a ton of warm musical layers to ensure the good vibes." 8. Breakage 'Elmhurst Dub' Index "The first single on Breakage's new label is a percy. It's got that proper dutty sound that manages to do a whole lot with the bare essentials. I wish there was more of this sound around to be honest." 9. Redeyes 'What She Wants (Lenzman Remix)' Vandal Records "When Redeyes asked me if I wanted to remix something for his label, I knew I had to jump on this track. One of my favourites of 2016." 10. Lenzman 'In My Mind' The North Quarter "This is the lead track off my brand new 'Earth Tones EP', featuring Mancunian Neo Soul empress IAMDDB."
back to top
DJMAG
all sections