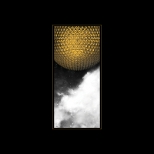 9.0
Facebook Twitter Google+
Call me a ponce, but despite the fact that barely anybody's heard of Dundee's Loops Haunt, this seems like a big record. That's probably because it sounds like a big record, and I don't mean that in the Â“big tuneÂ” sense - I mean it physically sounds monstrous. Haunt's 'Rubber Sun Grenade', released on Fortified Audio last year, was self-destructing wobble dubstep done right, and 'Ark' dissolves that larger-than-life violence into a slowly imploding space station. The obvious comparison would be Rustie on a darkside film soundtrack tip, but really this is out there on its own.
admin
Facebook Twitter WhatsApp

7.0
Facebook Twitter Google+
Yes, it's another review of some Bristol newcomers, but the city really is killing it right now. Zhou are from the same crew as El Kid, Vessel and the unstoppable Kahn, and 'I Remain' is the sort of shuddering bleached-out dubstep that probably gets Punch Drunk's Peverelist so misty-eyed that he couldn't refuse to sign it if he tried.

7.0
Facebook Twitter Google+
First full single from Mike Q, a.k.a. chief protagonist of the East Coast's ballroom dance scene - direct dance music made strictly for the clubs with zero compromise and at one point, some samples of what I think is a barking dog.
back to top
DJMAG
all sections