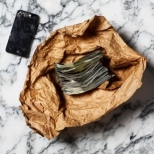 8.5
Facebook Twitter Google+
A decade on since Dizzie’s eponymous debut and now in the shadow of Wiley/Wretch kingpins troubling the No.1 chart positions on the regs, the grime diaspora couldn’t be in ruder health. And it’s always providing fresh influence, neatly encapsulated here by Finland’s Twwth; raw grime energy mixed with an urbanised and contemporary techno aesthetic softened by plenty of chopped and distorted R&amp;B vocals: hits the spot!

9.0
Facebook Twitter Google+
A crackin four-track EP here from Oli Brand, delivering a package that satisfies all your musical needs in one go. First up is the rough, filtered techno-meets-UK bass music hybrid of ‘InDisguise’ with its hint of acidic intention that should be in any self-respecting DJ’s set this winter. ‘Killjoy’ drops a few kicks and snares to connect with the dubstep heads but sounds much fresher, whilst ‘Subconscious’ and ‘Timelapse’ meander off into delicately textured electronica.

8.5
Facebook Twitter Google+
With previous releases on Somethinksounds and Meltdown Records, EVM has already pricked a few ears pon the electronica scene, and is well set to do even more with this EP. Featuring the vocals of Daiva it’s a superb blend of modern soul and bass music. It’s the original all the way, as the 'Garage Remix' is ruined by a terrible dubstep-esque bassline. Check ‘Beyond’ for some slappy bass funk and 'Dibi Dibi' for some polyrhythmic dancehall pressure. One to watch.

8.0
Facebook Twitter Google+
Whilst nothing wildly original here from the Sub FM resident DJ, there is a certain meditative element to this pair of tunes which raises them above the ordinary. ‘Narabeh’ clearly takes inspiration from the Iranian city it is named after, with subtle application of Middle Eastern instrumentation entwined in an equally subtle dubstep roller. Alpha channels a more European schematic, but is still heavy with the esoteric vibes. One “for the heads” as they say.

8.0
Facebook Twitter Google+
Six unreleased dubstep growlers from the dungeon duo of Sleeper &amp; District on Distance’s Chestplate label. It’s a powerful and oppressive mix of trollish stompers often laced with a lashing angry venom, and rolling darkside numbers which explore percussive nuance and filtered dread in equal measure. This style of dubstep will always sound at its best leeching out of a huge stack of 18-inch scoops in a dark, weed-scented basement.

8.0
Facebook Twitter Google+
Bumpy and thumpy manoeuvres from Presk here, on the ever-consistent Ten Thousand Yen imprint. The 'Saluki EP' opens with a funky synth workout, which feels like a gentle prelude to the skippier and scratchier ‘MOD1’, before descending into the deeper house realms of ‘Rais’, culminating in the upbeat ‘Vigor’, with its contrasting dub chords and noodling keyboard lines.

'Why They Trippin' EP'

7.0
Facebook Twitter Google+
A decent slice of booty bass-come-electro from Santero, with the usual combination of hip-hop soundbites and punchy drums, and a fistful of remixes — check Ursa Major, a resident at Trouble &amp; Bass for a stripped-back roughneck remix of 'Why They Trippin'' and The Elementz’s slightly tropical treatment. But sadly the deep house towards the end and Warp Records-inspired 'Warped' just feel too disjointed for the EP to make sense.
admin
Facebook Twitter WhatsApp

8.0
Facebook Twitter Google+
A tight EP from an Austrian producer who knows how to create a groove stinking of fun, funk and atmosphere; label under ‘dancefloor’.

2.0
Facebook Twitter Google+
I’m not sure what to say about this really, and I can only describe it rather feebly as popstep? How far the apple has fallen from the dubstep tree.

1. Compa Prayer Unreleased "Hard-as-nails quarter-step with foley percussion including ring-pull and lighter spark sound effects, haunting pads and synths. Crunchy distorted metallic mid-stabs and snares shatter the atmosphere." 2. Mark Pritchard & David Brinkworth Sentience Innervisions "When I listen to this track it sends me deep into another world, and I don't want to escape. Absolutely breathtaking collaboration, but that's Mark Pritchard all over." 3. Mala & Sgt Pokes Answer Me Tectonic "One of my personal favourites by Mala. That ghostly piano riff, those dub siren smashes that mark the bars paired with the bongos... stone cold, enough said." 4. Compa & Ipman Let Them Boka Records "I've been playing this one every set around the world for the last year, every time it gets a brilliant reaction. It's a dark, tribal roller with an icy cold overlying synth-line." 5. Biome & Fallen 45 Searching Wheel & Deal "As usual, straight to the cutting house to put it on a dubplate. Dark, end-of-world atmospherics and piercing mid-bass. Everything Biome is serious. The man is a machine." 7. Compa I Can't Forgive Unreleased "Emotional and reminiscent but heavy enough to shock a soundsystem in a club, this one is made to move people mentally and physically." 8. Gantz Exile Unreleased "I've been hammering this every set for a while now. I'm an absolute sucker for any kind of chanting and the snappy snares stand out a mile off." 10. Compa Alpha' Deep Medi "Exclusive to Mala for the last two years, 'Alpha' finally sees the light of day marking my debut 12" for Deep Medi in December."
back to top
DJMAG
all sections