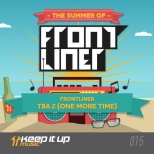 Keep It Up Music

10
Facebook Twitter Google+
Some tracks build into anthems over time through repetition. Others hit you with an instant feeling on the first play. Frontliner's latest production is very much the latter. Everything about this track is cutting-edge hardstyle, but whether it’s the vintage style vocal or epic melody, something hits you with a warm feeling of nostalgia the first time you hear it. A true example of music with feeling and emotion, and a perfect end-of-night anthem from the melody man of Holland.

9.0
Facebook Twitter Google+
Hard Driver has been tipped for the very top by the likes of Coone and Headhunterz. With his infectious productions featuring catchy melodies and fresh, accessible, raw drops we can certainly see why. This next single from him has a hands-in-the-air glide melody and subtle vocal building up and dropping, with some seriously heavy kicks and time-stretched stabs.

8.5
Facebook Twitter Google+
Blurring the line between metal and gabba, this collaboration straight out of NYC shows some of the exciting collaborations that are happening since the explosion of electronic dance music in America. Being no stranger to the metal sound, hardcore legend Lenny D not only makes this an interesting crossover track, but something that will work on the dancefloors too.

9.0
Facebook Twitter Google+
Italy’s leading lady of hardcore AniMe is back with another awesome EP to damage your ear-drums. My pick of the tracks is 'Cowards'. The hook of the track is a movie-style vocal in the main break, carried by a crisp and crunchy kick-drum and on-beat melody to get the people stomping hard. The main break dials up the euphoria on the melody before unleashing hell on the climactic second drop. A very powerful track.

9.0
Facebook Twitter Google+
Last time these three guys hit the studio together we were blessed with a dancefloor banger, so expectations were high for this follow-up. Luckily there is no disappointment in sight with this perfect balance of old skool/nu skool production. The legacy of these three legends shines through, with the old skool samples and kick and bass mid-intro, but their relevance in the EDM sound today is more than apparent, with the big room house-style melody and blistering hardstyle kick on the drop.

'Fuel For the Night (Q Base Anthem)'

9.0
Facebook Twitter Google+
Geck-o is the king of the Qult sound, fusing house, techno and hardstyle into a wonderful new genre of hard goodness. It’s only fitting that this guy be given the honour of writing the Q Base Qult anthem this year. Shuffly percussion, rising synths, epic melodies and brutal kick-drums all wrapped up in a relatively modest 135bpm package. It’s not hard to see why producers of all styles are experimenting with this sound after hearing this. Freedom and creativity at its fullest.

7.5
Facebook Twitter Google+
Despite many hard trance artists abandoning the scene to capitalise on the explosion of either EDM or hardstyle, a few have stayed true to their passion, and there are no better examples of this than Wragg &amp; Nomad. This latest collaboration is all about the pounding dark groove, bubbly acid lines and haunting melodies. Great to see these guys continuing to push the sound forward.

8.0
Facebook Twitter Google+
Andy Whitby’s HARD brand has been taking over the UK’s hard dance circuit this year, with packed events across the country, as well as his highly popular monthly Hardkast. With the label now in full swing this new release features a very catchy male vocal overload on top of a piano lead breakdown, building with sharp snares and dropping with a dirty electro bassline, with a bouncy element. Fresh hard house for 2014.

9.0
Facebook Twitter Google+
Quite literally everything either of these duos touches is hardstyle gold, so to put them all in a studio together was always going to result in a mammoth track. 'Ghettoblaster' has that TNT groove running throughout, combined with Audiotrics' uplifting melodies and a very familiar vocal which just brings it all together. Really accessible hardstyle, whilst steering clear of the obvious and commercial sounds.

'So You Wanna Be Hardcore'

8.5
Facebook Twitter Google+
Zany, Jowan &amp; DV8 team up once again as the legendary Donkey Rollers with a superb vocal laid down by DV8, and some furious beats around it, keeping all the fans of raw sounds happy.

8.5
Facebook Twitter Google+
Sometimes I wonder how these guys can sleep at night — after producing such brutal, sinister rawstyle they must have worst nightmares than eating a block of cheese before bed. Nevertheless if you're into the raw sounds it doesn't get much bigger than this, with the epic film score-influenced breakdown building into a simple, twisted melody, dropping with seriously raw power.
admin
Facebook Twitter WhatsApp

8.0
Facebook Twitter Google+
Brand new act Audiometrics take on this classic hardstyle track by one half of Showtek, DJ Duro, showcasing that for a brand new act on the scene they already have their production values nailed down to compete with the best. Keep an eye on these guys into 2015...

8.0
Facebook Twitter Google+
Breaking the rules of both hardstyle and moombahton on this one, an 105bpm booty shaker with brutal kick drums. I love it!

9.0
Facebook Twitter Google+
The pioneer of the freestyle movement’s latest production is a high energy, house-influenced, triplet stomper guaranteed to get any hard party rocking.

3. Wildstylez Ft. Noah Jacobs Falling To Forever Lose Control Music My own track ‘Falling To Forever’, which was adopted as the anthem of this year’s edition of Dance Valley and released on Lose Control Music, is something I’m very proud of. It was great working with Noah Jacobs, who provided the vocals, altogether turning it into the euphoric trip that it represents.
back to top
DJMAG
all sections