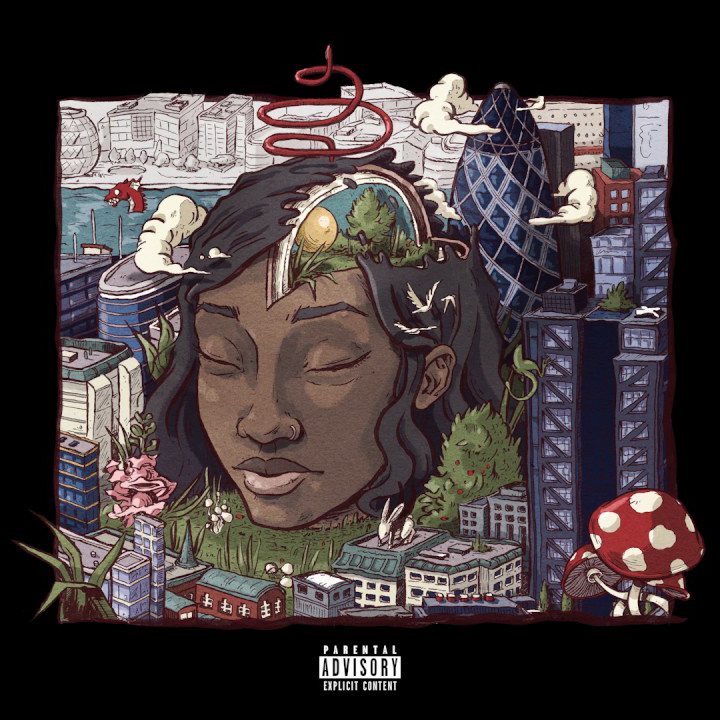 9.5
Facebook Twitter Google+
‘LMPD’ is a startling opener to Simz' new masterpiece 'Stillness In Wonderland' — she’s got a band together as good as Badu on ‘Ankh’ but there’s something bleaker about what they create for Simz here, both lush as a picture-postcard but shot through with the rainy grit of this dirty auld isle. So even though the lyrics seek spiritual connection with Nina Simone and Maya Angelou there’s no faux-Americanisms ever in Simz music, there’s the charting of a black British female space that’s uniquely Simz’ and previously almost entirely unmapped. Simz Music is the only genre this fits in. Must be a star by the year's end or UK music's racism and sexism is confirmed for all time.

7.5
Facebook Twitter Google+
While we’re in the windy-city do try and tap into this nutter’s discography on Bandcamp. There’s over 150 drops on there but this, his latest, demonstrates a knack for addictively monomaniacal boombap production and verbals that combine a Wu-style unstoppable surrealism with sporadic agit-prop interrogations of orientalism, colonialism and the endless tendrils of racism’s growth and spread. You don’t want to get cornered by this guy though you might want to subscribe to his newsletter. Make sure you know where the exits are.

'Being You Is Great, I Wish I Could Be You More Often'

8.0
Facebook Twitter Google+
2013’s stunning 'Ghost At The Finish Line' and last year’s 'Lullabies For The Broken Brain' should’ve hipped you that QC is one of the most riveting voices and visions in US hip-hop this decade — this new drop is sparser, sharper, like a step back from a big-band brashness to a tight little quartet. He’s got the same kind of unhinged freedom of thought as a Kool Keith but there’s none of the hysteria or extremity, just a gentle street-level bemusement that suits the downtempo vibe perfectly. A reminder that the steel-mesh need not always be rattled by volume, can also be spoken to with the gentleness of a dictaphone diary or an intercom into a rubber-room. Outsider-music that happens to be hip-hop.

9.0
Facebook Twitter Google+
Kazi and Madlib recorded the 'Blackmarket Seminar' album way back in 1996 but it’s remained entirely unreleased until now — unfathomable given how Madlib’s profile has grown so much since but deeply gratifying that Below System are finally giving it the remaster and release it deserves. Yes, this title-track is from deep in the phantom ‘golden age’ but truth be told it sounds anything but dated. Kazi’s raw talent and Madlib’s developing skills find themselves in perfect symbiosis — the result is a track that’s dark, grainy, deeply funky and could’ve been recorded last week. Get drenched.

8.0
Facebook Twitter Google+
Nigh-on 20 years since ‘Uptown Saturday Night’ first blew our minds with Camp Lo’s unique walk and talk — the 'On The Way Uptown' collection of demos and rarities from their early years impossibly manages to build the intrigue about this great lost zenith of '90s hip-hop. This is the highlight. Ski on the beats and loops and that remarkable singularity of sound is there from the off, Sonny Cheeba and Geechi Suede already discovering their utterly idiosyncratic way with fucked-up syntax and word-wrangling. Alongside Das Efx, a reminder of a time when oddity of sound and vision was prized by B-Boys. Essential.

7.5
Facebook Twitter Google+
Timely reish of a long-disappeared 2004 corker from this LA three-piece: think the terpsichorean twistedness of a Pharcyde combined with the thoughtful darkness of the criminally forgotten second Dream Warriors album ‘Subliminal Simulation’. Unlike so many of the West Coast’s noughties retronauts ‘Slow Your Roll’ doesn’t just retrieve old motifs (like say Ugly Duckling and Jurassic 5 did), it takes on the spirit of late '80s/early '90s Native-Tongues hip-hop and finds its own supremely wobbly way of walking forth. Boy howdy it immediately.

'The Ghost Of Living'

8.5
Facebook Twitter Google+
The diametrical opposite to Chief Keef presents another side to Chi-town hip-hop: 'The Ghost Of Living' is a collaboration with Big Ghost Ltd, a producer best known thus far for his work with Westside Gunn and Conway on the astonishing 'Griselda’s Ghost' from last year. This is Spencer’s second drop in two months after November’s startling 'St Gregory' mixtape. Great sonics from Big Ghost, crisp murkage shot through with a real vintage jazzy tone and Vic spends much of his time infuriating any other rapper within earshot. Cop it as soon as you can.

7.5
Facebook Twitter Google+
Woah — if last year’s utterly divine ‘Alwasta’ set was proof that Brooklyn’s Oddissee was a lot less interested in underground appeal than he was in taking conscious rap overground again then ‘The Iceberg’ doesn’t just crossover, it stakes out its own turf with lines deep as oceans and beats so immediate you could almost call them radio-friendly. Hats off to him, and MMG for crafting such exquisite pop without the overthink that so often accompanies underground hip0hop. No reason on Earth this can’t be the year Oddissee becomes a star.

8.0
Facebook Twitter Google+
Sneaking out near the end of 2016 this engrossing cassette-only release could be seen as an equally great companion piece to that other instrumental hip-hop masterpiece of last year, The Gaslamp Killer’s astonishing 'Instrumentalepathy'. The kind of crepuscular, odd, time-sig fuckery you suspect Boards Of Canada would make if they were asked to create a hip-hop. You won’t even think about sellotaping over the holes. Superb.
admin
Facebook Twitter WhatsApp

8.5
Facebook Twitter Google+
Another tantalising glimpse into 'Mansion 38', surely one of the most hotly anticipated albums HF have ever given us. Here Chemo cooks up a truly psychedelic swirl from what sounds like an 'In Morroco' offcut while that basketcase Trellion dribbles his usual gospel. Essential.

8.0
Facebook Twitter Google+
Loving MOST of RD59's recent run of freestyles, this one in particular cos the instrumental of Phresher's 'Wait A Minute' is the kind of music you just can't stop listening to. Great lines here throughout as you'd expect, hope he gives us a follow-up to the massively underrated 'Layers' soon.

8.0
Facebook Twitter Google+
Gotta admit I listened to this cos of that title but I'm glad I did, a weird mix of robo-dancehall, Santogold-style sternness and a real great line in femme-aggrovation that I'm going to bump until Spring finally comes. Diggit.

1. G-SIDE FEAT. MALI BOI 'Mission Control' Slow Motion Soundz "We’re touring in support of our sci-fi rap album, 'Splendor &amp; Misery'. This particular song, 'Mission Control', was cut from the album for some reason, but it’s one of the group’s spacier tracks." 2. Outkast 'E.T. (Extraterrestrial)' LaFace "Consider that the beat for 'E.T.' contains no drums, making Big Boi’s loose, groovy flow feel untethered to anything in the track, and Andre 3000’s already stiff, articulate style seem even more robotic. It’s a perfect example of the duo’s unprecedented genius." 3. DR OCTAGON 'Halfsharkalligatorhalfman' Mo'Wax "One of Kool Keith’s many alter-egos reimagines The Island of Dr. Moreau." 4. THEESATISFACTION 'EarthEE' SubPop "The rap contingent of Sub Pop Records is uniquely dedicated to sci-fi. We feel quite at home there, and we feel honored to be label-mates with these fine hip-hop visionaries." 5. Future 'Space Cadets' NA "Future inherited his sci-fi perspective growing up around Organized Noize and The Dungeon Family and has woven outer space themes throughout his catalogue. This track, produced by Zaytoven, comes from the strongest of his early mixtapes — 'Astronaut Status'. 6. DJ QUIK & KURUPT 'Jupiter’s Critic & the Mind of Mars' Mad Science "This is definitely the weirdest moment on Quik and Kurupt’s 'BlaQKout'. Quik raps through a ring modulator that makes him sound like an even-further-out impersonation of Devin the Dude’s alien character Zeldar." 7. Lil Wayne 'Megaman' Young Money Entertainment "This track — which samples the score to the sci-fi NES game MegaMan — is one of the more focused moments on 'Tha Carter IV', proving he’s both still an incredible rapper, and authentically weird." 8. FREESTYLE FELLOWSHIP 'When the Sun Took a Day Off and the Moon Stood Still' Project Blowed "More fantasy than sci-fi, this track finds the Fellowship spitting mythology, full of creepy folkloric details." 9. Snoop Dogg 'Batman & Robin' Priority "This inexplicable track is actually about Batman and Robin. Snoop never gets enough credit for the truly strange risks he takes." 10. KEVIN GATES 'Twilight' N/A "'Splendor &amp; Misery' contains a lot of references to literary sci-fi, but none to the bestselling vampire novels of Stephenie Meyer’s 'Twilight' series. We left that to Kevin Gates who wrote this song from the perspective of a sparkly, undead casanova, and somehow made it sound really cool."
back to top
DJMAG
all sections