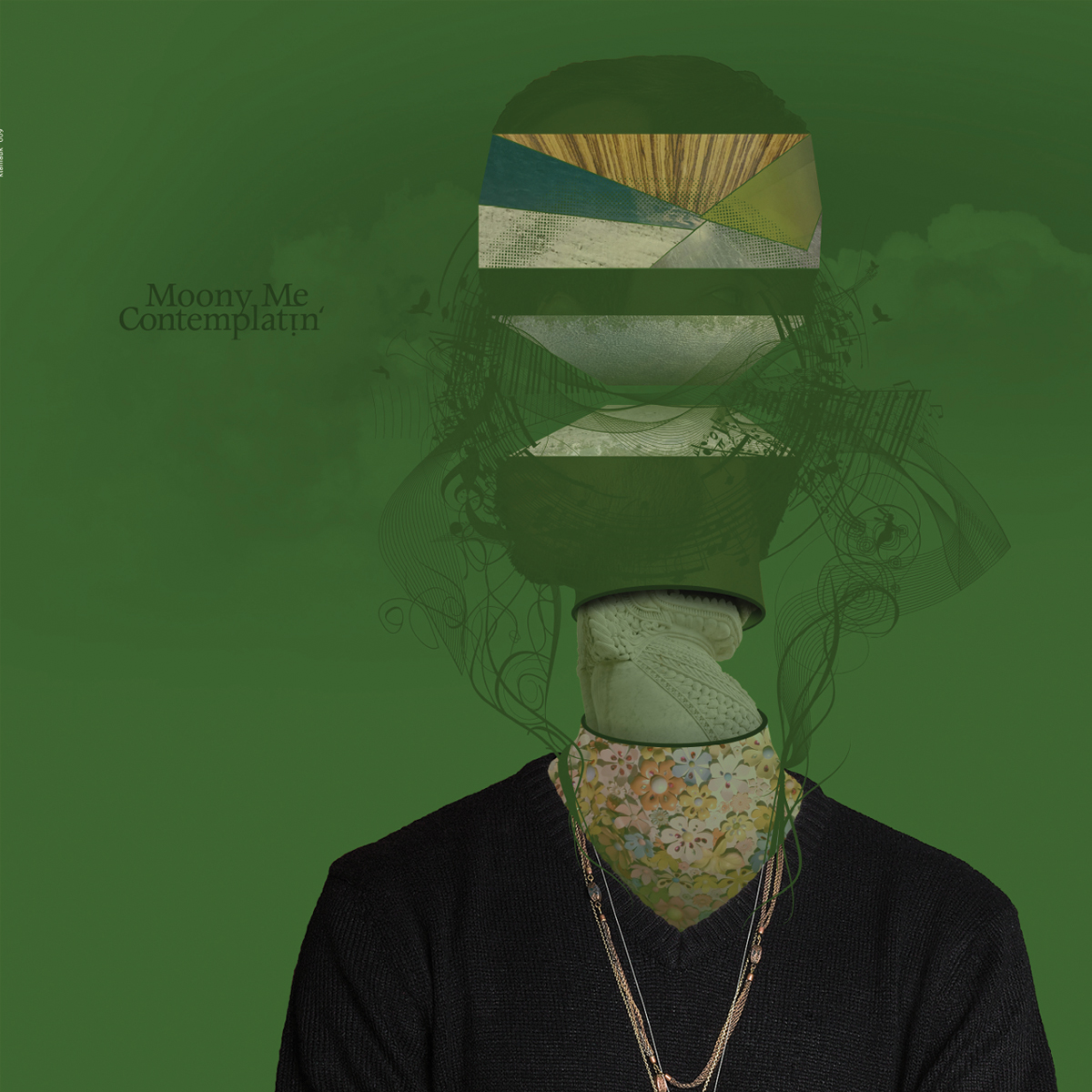 9.5
Facebook Twitter Google+
Thoroughly arresting house music here from German/Venezuelan/Austrian Eduardo A. Arreaza, aka Moony Me, and Klamauk's first salvo of the year. It sets the bar perilously high, mind you. 'City of Storms' busts out warming, slightly wonky pads, before Iron Curtis gets his hands on it, delivering a scorching, peak-time tear-up. Both deserve to be future classics. Meanwhile, 'Glass Jungle Chant' hurls out some delirious digital samba vibrations, among the brilliantly weird jazz samples. Just brilliant.

8.5
Facebook Twitter Google+
Malmö born, Barcelona residing Rimbaudian (aka DJ Seinfeld, aka Armand Jakobsson) is one of the most exciting new house producers flipping faders at the moment. This four-tracker for Doc Daneeka's Ten Thousand Yen shows the wealth of skills at his disposal; there's wig-out jazz (the good kind) on She Taught Me How To Love, and frisky, lo-fi house vibes on Drop It On Em. Over, I Would Do Everything Again and Again and I Said Goodbye To Dreams of You at the Shore, despite their verbosity, are breezy and blissful.

9.0
Facebook Twitter Google+
Lidell and Herbert have been muckers for donkey's years, but this bootleg of the former's track 'When I Come Back Around' from his majestic 2005 album 'Multiply' is special. Knocked up by Herbert in 'laptop-in-a-hotel-room' style, he's been dropping it in sets to general hysteria for a while, and now its being unleashed on Accidental Jnr, his spin-off imprint for club gear. And club gear this most certainly is, heavy with tribal percussion, dark rave pads and Lidell's soulful delivery. Just essential.

9.0
Facebook Twitter Google+
This mysterious release on Rhythm&amp;Soul's eminent Slow Town imprint is reputedly from a 'well-known Chicago producer' under a nom de plume. Pared down, dark, funky and slightly weird, we reckon we might just know who is. And yes, it's probably who you think it is too. 'Secret Code of 7' is a brooding workout, flecked with burbling acid, while 'Microchip' drops in gospel organs among the shuffling percussion and a mucky bassline. Last track 'Four' is the one, though. A freaky, robotic work of certified genius. Superb stuff.

8.0
Facebook Twitter Google+
Despite making people flip excessively between upper and lower case if they want to document his progress or put his name on a flyer, there's still enough goodwill left to doff one's cap to Fuse London ressie Rich NxT, this third release on his NxT imprint providing ample bumpy thrills. '1=0' boasts dreamy pads amid the skippy percussion, while 'Trumadog' cleverly ploughs a narrow furrow without getting boring. Finishing up, 'FUHP' (MORE CAPS! ARRRGH!!) is solid warm-up gear, to be underestimated at your peril.

8.5
Facebook Twitter Google+
There's not much known about this debut from Patrick Conway for Radio Slave's ever-impressive Rekids. Save to say it comprises three tracks of heavyweight dancefloor gear. The title track is pinned down with bass enough to rattle your fillings, a pulsing synth squeezebox eventually giving way to a girthsome break which will have you and yours reaching for the lasers. Over, 'Orbit' is beamed in from deep space, a spooky, rave-indebted number, with a heavily syncopated re-rub from Hessle Audio co-founder Pangaea. Bosh.

8.5
Facebook Twitter Google+
Magnificent curation here from Man Power's Me Me Me imprint, bringing a masterstroke from James Hadfield and Danny Linton. With its tribal howls, Soak skirts the right side of 'world music' without being wanky — always a perilous tightrope act. Instead, it's wonky and wonderful. Man Power himself drops in a moody, acidic re-rub, while Axel Boman wallops yet another remix out into the bleachers, dropping the four-four in favour of a new genre, Balearic garage (which has just been coined here, this very moment).

8.5
Facebook Twitter Google+
Panthera Krause's third outing on Leipzig's sterling Riotvan imprint is a stunner, already finding fans in DJ Koze and Gilles Peterson. Twerk It is the show pony of the lot, an intricate, swelling, groove, all clattering claps and drums, bells, burbling synths, dreamy pads and shaking, rattling tambourines. It's just a joy to be around. On the flip, the beats break up, with Take Me busting out a b-boy loop under ecstatic noise, while Stonith drops cowbells aplenty atop clamorous percussion.
admin
Facebook Twitter WhatsApp

8.5
Facebook Twitter Google+
Oh yes. This blisteringly acidic four-tracker for The Bunker New York had us at hello. 'New Jack The House' is a deeply classy slab, while 'Forget It' is machine music par excellence.

8.0
Facebook Twitter Google+
One of last year's biggest tracks gets a pulsating remix from the marvellous KiNK and the trifecta of Classic's Luke Solomon, Eats Everything and Lord Leopard. What could possibly go wrong?

8.0
Facebook Twitter Google+
Phil Weeks is clearly never visited with writer's block. This eight-track EP being rather sturdy evidence of this, a collection of weaponised house music to damage dancefloors. Bravo.

1. Howl Ensemble 'Rave' Nila "Perfect after-hours track, lined with loose drums that have a punchy kick, classic-sounding hats, random FX and interesting organic sounds." 2. Pete Bandit 'Dirschauer' Times are Ruff "An intricately created after-hours track with a little more bounce." 3. Weiss 'Keep On Locking' Weiss "This track by UK house producer Weiss is a nice combination between looseness and a clean, straight-up rolling house track." 4. Dan Shake 'Claudias Trip (Radio Slave Remix)' Shake "Everyone knows the productions of Radio Slave are genius. This remix is another one of his trademark-sounding tracks laced with organic, gritty elements." 5. Cassy 'Keep Trying (Radio Slave Feel Raw Remix)' Aus Music "Another raw, loose, dirty, classic Radio Slave trip." 6. Marquis Hawkes 'Sweet Temptation' Aus Music "I’m a huge geek at heart. Every now and then I love playing with classic vocals. Marquis Hawkes reworks a very classic-sounding vocal into a magical mess of modern house." 7. Huxley 'Weapon (Dub)' Aus Music "Dirty, unassuming techno teased with a classic house vocal. These qualities together always feel right for me in a busy room." 8. Mia Lucci 'Chocolate Meister' Kindisch "I love the loose and random FX I used in this track. The drum patterns also. This track for me works well at the beginning of a night or during an early afternoon set. 9. Mike Witcombe 'Almond Rough' Kindisch "Mike is a favourite DJ and producer of mine from my home town. I love the way he uses old analogue drum kits and synthesizers to produce." 10. MR. G 'Grind' Phoenix G "I love everything about Mr. G and this track. Its rolling percussion, classic use of drums, the recurring vox stab and how it all comes together makes it a favourite."
back to top
DJMAG
all sections