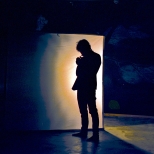 9.0
Facebook Twitter Google+
Clarian’s output, while infrequent, is always on-point. Falling on Gerber's Rumors imprint, ‘Fear &amp; Self Loathing’ is a heady soundscape of acidic textures, echoing synths and hallucinatory Arabian flute-work, yet remains dancefloor-poised throughout. Hunter/Game take things in to more restrained, zonal realms; their remix being less frantic and a little more robust. Christian Burkhardt then delivers more punch from the kick, highlighting the percussion and restraining the synths; still tense, yet more front-footed. The EP is rounded off with ‘Absence’, a seriously emotive cascade of atypical Clarian sound design. Brilliant.

8.0
Facebook Twitter Google+
This is a delightful debut release from the new young buck, Right On, coming out on Gruuv Records. You can hear why the 20-year-old Aachen native caught the ears of Gruuv's heads, Audiojack. Having delivered four originals for an EP that goes from the dark and zonal ‘Augen Zu!’ to the brighter ‘Wir Wissen’, on which he lays muted synth keys and a bumping bass groove above a tight off-hat-focused beat, there’s a solid signature throughout. He lays a further two technically proficient cuts to round off the EP, which, overall, confirms that he’s a name to watch and this EP will be getting rinsed.

8.5
Facebook Twitter Google+
Bouncing from the first beat, ‘Chicken’ doesn't piss around, utilising some nice sample work for added texture. ‘Phantom’ is a little more ‘heads down’ dance music, until Alexis reveals a vocal sample, which is eventually cut between the rhythm in typical Alexis Raphael style. Mar-T and Dave Nash both take hold of ‘Chicken' for individual remixes. Mar-T’s is delicate and screams edit from the get-go but comes in to its own halfway with a bassline synth that seriously jacks things up. Dave Nash alters proceedings with an atmospheric treat, heavy on the sound design, completed with a seriously dubby, bass-hefty drop. You won’t expect this, but you will love it.

8.0
Facebook Twitter Google+
Stepping away from his A Thousand Years alias, which was the catalyst for Jaymo &amp; Andy George to sign him, Zeké Africa drops his EP ‘The Fires Of Time’ on the vibrant Moda Black. It's a three-tracker, of which ‘Ghost’ is the absolute stand-out. Growing evocatively in the first half, with almost disoriented bass flutters, Zeké drops you into the groove with a purposeful, forward stepping b-line. This is solid, simple and very effective, but sets a bar that the other two tracks can’t quite reach.

8.0
Facebook Twitter Google+
Lauhaus knows how to groove. With an assured back catalogue of tightly produced house and techno under his belt, he makes his return to Danse Club with ‘Tabarca’. This jacks along with minimalistic flair and a gritty, muted yet determined stab sliding raucously along the low-end of the mix. ‘Unconditional’ adds further intensity with its rising high pad above an energetic groove. ‘Dominia’ furrows a more percussive edge, maintaining similar intensity with airy short stabs, and Hans Thalau nails a bouncey remix of ‘Tabarca’, adding held keys for a soulful feel, and a vocal element that counters the rumbling groove. Overall, a seriously good package.

7.5
Facebook Twitter Google+
Brazil’s HNQO displays impressive dexterity with his latest cut, out on Czech label BEEF Records. Four melodic arpeggiated tracks, led by the frantic ‘When We Are (Together)’, which eases in a haunting vocal from the midway break before slamming back down into a synthy apocalypse of sound. ‘S’il Vous Plait’ strides head-first with broader percussion — the scuttling hat-work and wide square synth stabs doing the hard work here. He goes deeper with ‘Far Beyond’, rumbling seductively in the low, teasing the ears with haunting soft-stabs, which gets a remix from M.in &amp; Markus Ferdinand, who trip-the-shit out of it with a slicing hat effect across a re-edited main body.

8.5
Facebook Twitter Google+
So much love for this EP on Hector Cuoto's Roush Records, packed full of simple dancefloor-aimed rhythms, and not a thing scrambled about it! A-side ‘Scrambled Rhythms’ is a bouncing b-line chunker and stomps joyously forward with a big, brash off-hat above. ‘Ten 30 One 33’ is a similar recipe, but with a more pronounced b-line tone, airy pad lines and a wider off-hat. Subtle but effective difference from the Californian master, Hector. It’s given some expert remix treatment from Tuccillo and DJ Sneak, both of whom get trippy, and do not disappoint.

7.5
Facebook Twitter Google+
Pawsa's 'Stage Two EP' typifies where the impressive party-turned-label, Solid Grooves, are aiming for; their home, the dancefloor. 'Event Horizon' blasts straight out the blocks, a pulsey sub-focused tech cut with rolling scuttling hat-work above. ‘Separation’ and ‘The Shapeshifter’ add some variety, but in essence it’s just more well-honed stripped-back goodness that doesn’t trump the A-side. Tiger Stripes take hold of ‘Event Horizon’ and turn in a sublime low-rumbling remix. They keep in line, on the stripped-back tip, feeling bigger. Simple and effective.
admin
Facebook Twitter WhatsApp

5. Alexis Raphael 'Proper Chorge' YouAreWe "A constantly evolving and developing roller. Named after a top geezer I know who keeps the plastic on his couch." 6. YANSON 'Reflex' Unsigned "Look out for this guy, gonna be big."
back to top
DJMAG
all sections