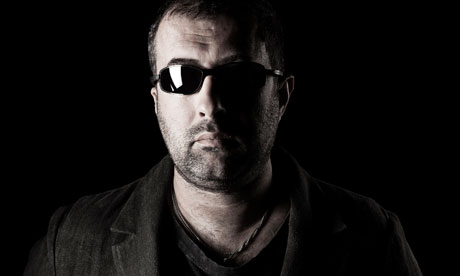 7.5
Facebook Twitter Google+
This remix package is sure to whet appetites for the imminent re-release of the Baron’s 2003 album. Marcel Fengler reworks ‘The Wolf’. He replaces the original’s pacy tribal groove with a wiry electronic rhythm, but the Berghain resident has the good sense to retain Clarke’s filtered stab. On the flip, Octave One get to grips with ‘Way of Life’. The Burdens are masters of hypnotic, percussive techno and this remix is no exception, as a driving rhythm provides the basis for a niggling acid line and muffled vocals.

8.0
Facebook Twitter Google+
The elusive Sotofett makes his debut on the long-running Borft. Anyone who follows the Norwegian producer will be aware of his wildly diverse sound and this is evident here, as he moves from the stripped back, dubbed out ‘Ol Pa Ibiza’ to the lush, tropical tones of ‘Ol Pa Klubb’. It’s unclear whether the mid-tempo ‘Ol Pa Smart Bar’ refers to the feted Chicago club, but it fades into insignificance when the EP’s best track, ‘Nekta Ol Pa City Club’, fired up by a dark bass and tingling acid, lumbers into view.

8.5
Facebook Twitter Google+
Previous Magic Waves instalments have focused on Italo and new beat, but this one is all about the 303. There’s no info about who is behind the record, but clearly they know how to work their machines. 'Borrowed Fogs' is an insistent, tweaked groove, led by steely drums, while 'Empty Warehouse' is a far more abrasive affair, with dark acid lines unfolding over a primal groove. The Front save their best till last though, and the lo-fi, drum-heavy ‘RTFM’ sounds like it was unearthed from a pile of DATs in the Music Box store room.

8.5
Facebook Twitter Google+
For many people, Zeta Reticula is and always has been Umek’s most interesting project. Focusing on pitch black dub techno and nocturnal electro, it yielded a series of seminal EPs on Billy Nasty’s Electrix label at the start of the '00s. The good news is that Zeta Reticula is back and it hasn’t changed much. Both 'Reticulum' and 'Solar Analogs' are post-apocalyptic 808 cuts. While the epic synths of ‘Circumstellar Debris Disk' see him explore a slightly different approach, the pulsing 'Rotating Protostellar Cloud' demonstrates that it’s only a temporary diversion.

7.5
Facebook Twitter Google+
Having successfully launched its sub-label, Brokntoys goes back to doing what it is best at — releasing killer electro. 'Far Away Lights' is a furious, frenetic workout, while on 'Morphed Reality', the approach is less visceral and more tripped out as gurgling acid comes together with detuned drones. 'Cosmos' sees Vertical67 change tact to deliver a slowed down, synth workout, while on 'You Shouldn’t Have Said That', he does his best to replace the twirling acid of early Chicago house over rolling 808s.

8.5
Facebook Twitter Google+
The Blue Hour project has been responsible for some fine '90s-inspired techno releases, but has never quite fulfilled its promise. Until now, that is. Both the title track and ‘Will Never Set’ are fine, rolling tribal techno grooves, however, when 'Blue Hour' goes deeper, the real magic happens. ‘First Light (Lucid Mix)’ is an atmospheric cut and 'Faithful Eventide' reminds this reviewer of Speedy J’s ‘De-Orbit’ in all its tingling, bleep-laden glory.

8.5
Facebook Twitter Google+
Having released on Fred P’s Soul People and Deeply Rooted, the next logical step for Jose ‘JC’ Cabrera was to set up his own imprint. ‘Vertigo’, the seventh Cabrera EP, showcases his ability at crafting deeply hypnotic electronic music. ‘Vertigo Master’ is driving, dub-fuelled techno laced with eerie strings, while on 'Nyame', Cabrera delivers breath-stopping, atmospheric break beats. Closing track 'Prayers to Anansi' is in a similar vein to 'Nyame', albeit with a more frazzled electronic feel.

9.0
Facebook Twitter Google+
Look back through their catalogue and you’ll find that this is only the fifth EP from The Connection Machine in the past 23 years. Yet like their 1994 debut, ‘Bitflower', this all too rare appearance shows why Jeroen Brandjes and Natasja Hagemeier are so well regarded. ‘X Manray’ is an atmospheric, abstract cut that features Hagemeier’s muffled vocals riding a misty melody, while ‘Echoes From Tau Ceti’ is mesmerisingly deep techno that not even the surprisingly jolly brass sample can detract from.
Richard Brophy
Facebook Twitter WhatsApp

8.0
Facebook Twitter Google+
Originally released on CDR back in 1996, ‘Satisfaction’ was apparently the work of a Belgian band. Edited and extended by DJ Gratts, this version is a wonderfully sleazy fusion of EBM, techno and new beat.

7.5
Facebook Twitter Google+
M-Step has been making music for the past two decades. This explains why this release moves effortlessly from the acid-soaked funk of ‘Xylograph’ into the mysterious-sounding ‘Atary5’ and the deep techno title track.